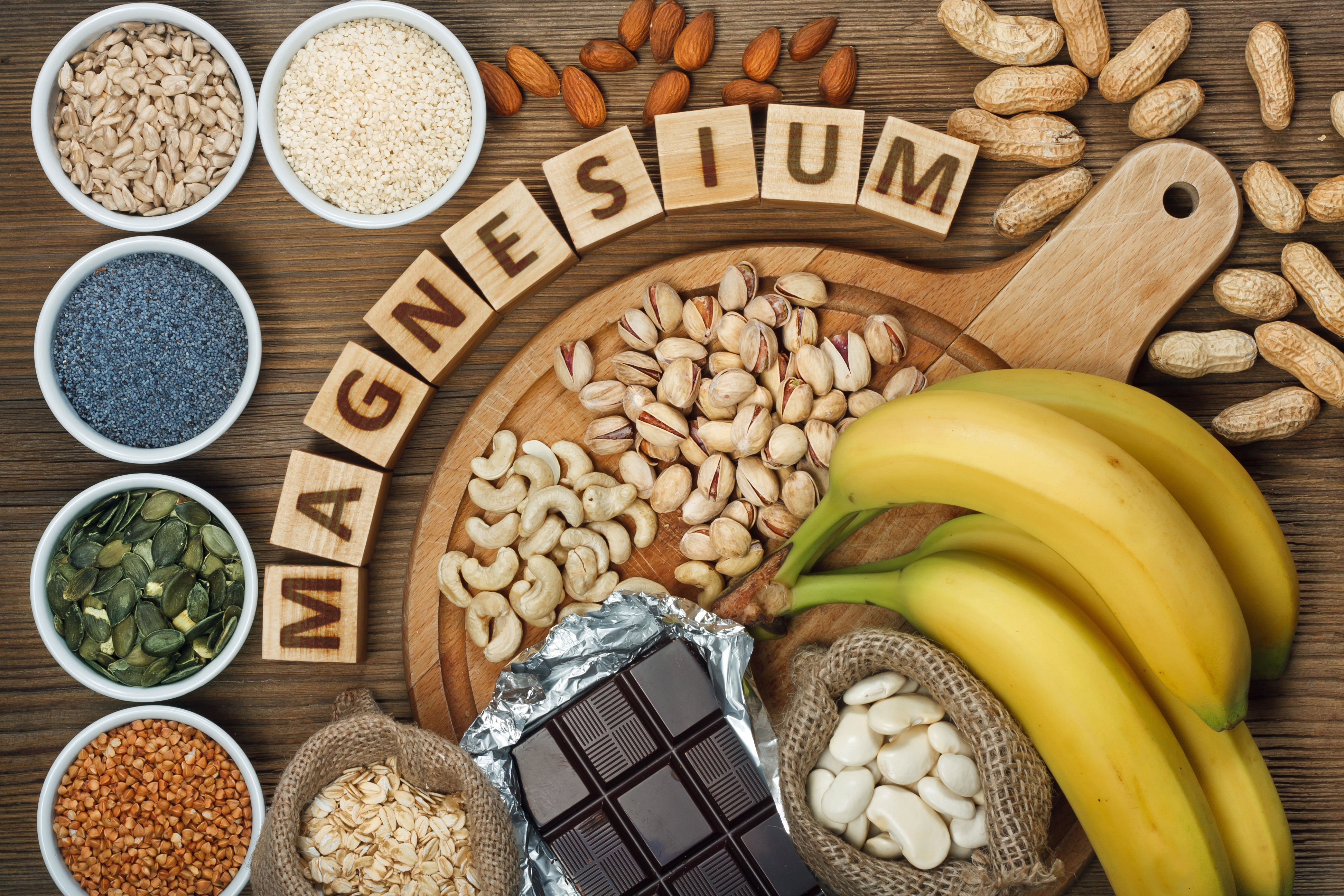 Magnesium is an essential nutrient that helps improve gut health, prevent eclampsia, and potentially improve a wide variety of health conditions. Is there enough in your diet? Find out here.

Magnesium is the fourth most abundant mineral found in our body [1]. It is essential to all living cells and vital for numerous physiological functions [2].

Over 300 enzymes require the presence of magnesium to function properly [3].

Because of its positive charge, magnesium stabilizes the cellular membranes [2].

Magnesium is important for:

Nutritional magnesium deficiency increases the susceptibility of the pancreas towards disease, by elevating calcium concentrations. Elevated calcium is an established risk factor for pancreatic inflammation (pancreatitis).

Low magnesium is associated with increased risk of death and kidney function decline in chronic kidney disease patients as well as mortality in dialysis patients [3].

Cisplatin, a commonly used chemotherapeutic for ovarian and other cancers, reduces magnesium levels in most patients and causes acute kidney injury in 25-30% of patients.

Magnesium salts are considered effective laxatives for relieving constipation. They are also considered safe for children [13].

Magnesium salts can also be used as antacids, which effectively reduce the acidity in the stomach [14].

Magnesium is considered an effective treatment for pre-eclampsia and eclampsia during pregnancy [15].

Magnesium supplementation resulted in a lower incidence of newborn jaundice and newborn hospitalization [17] and reduced the risk of low birth weight [16].

Magnesium supplementation among women with pregnancy-induced diabetes had beneficial effects on metabolic status and pregnancy outcomes [17].

The transfer of large amounts of magnesium from the mother’s blood to the fetus with other nutrients may contribute to the occurrence of post-pregnancy depression (by causing magnesium deficiency in the mother) [19].

Magnesium is required for the normal electrical activity of the heart, and has beneficial effects on the cardiovascular system, by widening blood vessels, improving fat metabolism, reducing inflammation, and inhibiting blood platelet aggregation.

Magnesium is used as a first-line therapy for torsades de pointes, a type of arrhythmia of the heart [14].

Increased consumption of magnesium-rich foods, such as whole grains, nuts, and vegetables has been estimated to lower the risk of cardiovascular mortality by 28% [22].

Self-reported magnesium intake was inversely associated with the hardening of the arteries (calcification), which may play a contributing role in magnesium’s protective associations in stroke and fatal heart disease [23].

On the other hand, elevated magnesium may have a harmful effect on bone metabolism and parathyroid gland function, leading to mineralization defects [26].

Bone lesions and lower bone mineral density were recorded in cases of acute exposure to high-dose magnesium in humans. Magnesium consumption slightly greater than the RDA was associated with increased lower-arm and wrist fractures that were possibly related to more physical activity and falls [24].

Low magnesium has been implicated in the cause of liver disease, especially non-alcoholic fatty liver disease and nonalcoholic steatohepatitis. Both conditions are strongly associated with insulin resistance, as well as obesity, type 2 diabetes, elevated fat levels and high blood pressure [27].

Magnesium was inversely associated with metabolic syndrome [28], and oral magnesium supplementation improved the metabolic profile and lowered the blood pressure of metabolically obese and normal-weight individuals [29].

In the study, blood pressure, insulin resistance, fasting glucose and triglyceride levels all decreased significantly in the subjects who received Magnesium chloride compared with individuals who didn’t [29].

Lower magnesium intake was associated with a higher risk of diabetes in the Taiwanese population [30].

Greater magnesium intake was associated with a lower risk of type 2 diabetes and metabolic abnormalities [31].

Increased consumption of magnesium-rich foods such as whole grains, beans, nuts, and green leafy vegetables may reduce the risk of type 2 diabetes [32].

Magnesium deficiency can lead to brain artery spasm and increased the release of pain substances (such as substance P). Significantly lowered serum magnesium levels have been seen in migraine and tension headache sufferers.

A high dose (600 mg) of oral magnesium daily for 12 weeks significantly reduced the frequency of headaches by 41.6%, and also reduced the severity, drug usage, and duration of the acute attacks [5].

Chronic fatigue syndrome patients who are magnesium deficient benefit from an injection of 580 mg magnesium [37, 38].

Multiple studies have found that single, high doses of magnesium can relieve symptoms of asthma, especially in children. It is unclear whether taking magnesium supplements has any particular benefit to asthma; talk to your doctor before supplementing for this reason [40, 41].

In multiple clinical trials, people who ate high-magnesium diets were significantly less likely to develop metabolic syndrome. It is unclear whether supplemental magnesium might have the same effect [42, 43].

The following purported benefits are only supported by limited, low-quality clinical studies. There is insufficient evidence to support the use of magnesium for any of the below-listed uses. Talk to a doctor before using magnesium supplements, and do not use them in place of something a doctor recommends.

Magnesium supplementation has led to reductions in blood pressure of up to 12 points (mmHg) [47, 33].

In a clinical trial, magnesium supplementation reduced anxiety and anxiety-related disorders when used in combination with other vitamins, minerals and herbal extracts [49].

Magnesium relieved premenstrual anxiety in women, when taken together with B6 [49].

Patients with OCD were found to have lower magnesium [52].

Magnesium’s anti-anxiety role is mediated in large part by its ability to block NMDA receptors [50].

Magnesium plays a role in many of the pathways involved in depression and is found in several enzymes, hormones, and neurotransmitters [53].

Mice consuming a diet with very low magnesium content-consisting of only 10% of the daily requirement-showed depressive behavior [51].

Major and suicidal depression particularly seems to be related to magnesium insufficiency [19].

Magnesium supplementation has been linked to improvements in symptoms of major depression, premenstrual symptoms, postpartum depression, and chronic fatigue syndrome [53].

Administration of magnesium sulfate to rats subjected to traumatic brain injury significantly decreased both incidences of post-traumatic depression and its severity [19].

Co-treatment of magnesium salts and antidepressants from different classes (i.e., fluoxetine, imipramine, and bupropion) resulted in the synergistic antidepressant-like effect [19].

Case studies of magnesium supplementation reported improvements in depression, anxiety, and sleep within one week. Surprisingly, in one study, low magnesium intake in older adults seemed to protect from depression [53].

Reduced serum levels of magnesium were found in patients with ADHD. Psychostimulants increased serum magnesium levels in ADHD after 3 weeks of treatment [54].

Magnesium supplementation may be beneficial in treating attention-deficit/hyperactivity disorder (ADHD).

The immunomodulatory effect was mediated by magnesium rather than sulfate, and it was reversible [56].

Several pieces of evidence link low Magnesium to aging and age-related diseases. Studies have shown that cultures in low magnesium (Mg) accelerates the death of human endothelial cells and fibroblasts [58].

Magnesium inadequacy interferes with cellular metabolism, which could affect this process.

Magnesium in the mitochondria accounts for one-third of total cellular magnesium [59]. Magnesium forms a complex with ATP, which is an important source of stored energy.

A large portion of the energy used in humans is produced by mitochondria through the movement of electrons over the respiratory chain.

Inadequate availability of magnesium may lead to reduced mitochondrial efficiency and increased production of reactive oxygen species with consequent structural and functional impairment to proteins, DNA, and other essential molecules.

Hence, magnesium seems fundamental for the control of oxidative stress and to maintain the normal function of mitochondria.

Magnesium deficiency exacerbates chronic inflammatory stress and may play a role in the onset of cancer. Middle-aged men with higher serum magnesium concentrations had a 50% lower risk of cancer death than those with low serum magnesium [4].

Low consumption of magnesium is common throughout the world [1].

Low magnesium levels in the body may occur due to defects in its absorption or as a result of its loss via kidneys (in case of diabetes, alcoholism, treatment with antidiuretics, aminoglycosides, fluoroquinolones, cisplatin, digoxin, cyclosporine, amphotericin B).

Magnesium excretion increases while absorption decreases with age, because of various chronic diseases and decreased intake of foods high in magnesium [53].

Elderly women may be more susceptible to magnesium deficiencies than men, partly because they are more likely to have osteoporosis, which limits the exchange of magnesium between bone and blood [63].

Severe dietary magnesium restriction has a detrimental effect on metabolism, glucose balance, and retention and excretion of other minerals [22].

Side Effects, Sources, and Bioavailability

Too much magnesium can also cause loose stools and “make you go.”

In patients with chronic renal failure or in individuals undergoing dialysis, serum magnesium concentrations are frequently elevated and correlate with mineralization defects [2].

Magnesium can sometimes potentially increase GSK3b, a problematic protein, but this can be inhibited by lithium [65].

Consumption of these foods can easily elevate magnesium levels [53].

Magnesium-containing supplements are generally well-tolerated with very few reported side effects [49]. Side effects include gastrointestinal upset such as nausea, vomiting, or diarrhea in some people [53].

Not all supplements of magnesium are readily absorbed [5].

Organic forms of magnesium like aspartate, citrate, lactate, fumarate, acetate, ascorbate and gluconate have greater solubility and bioavailability in comparison to inorganic forms like oxide, sulfate, chloride, and carbonate [47].

A magnesium chelate such as magnesium citrate is considered safe at doses up to 600 mg per day in adults [5].

Evaluation of both circulating and dietary magnesium is important because circulating magnesium reflects not only diet but also gastrointestinal absorption and renal regulation [22].

26 Supplements that May Support Liver Health

10+ Benefits of Agmatine + Side Effects