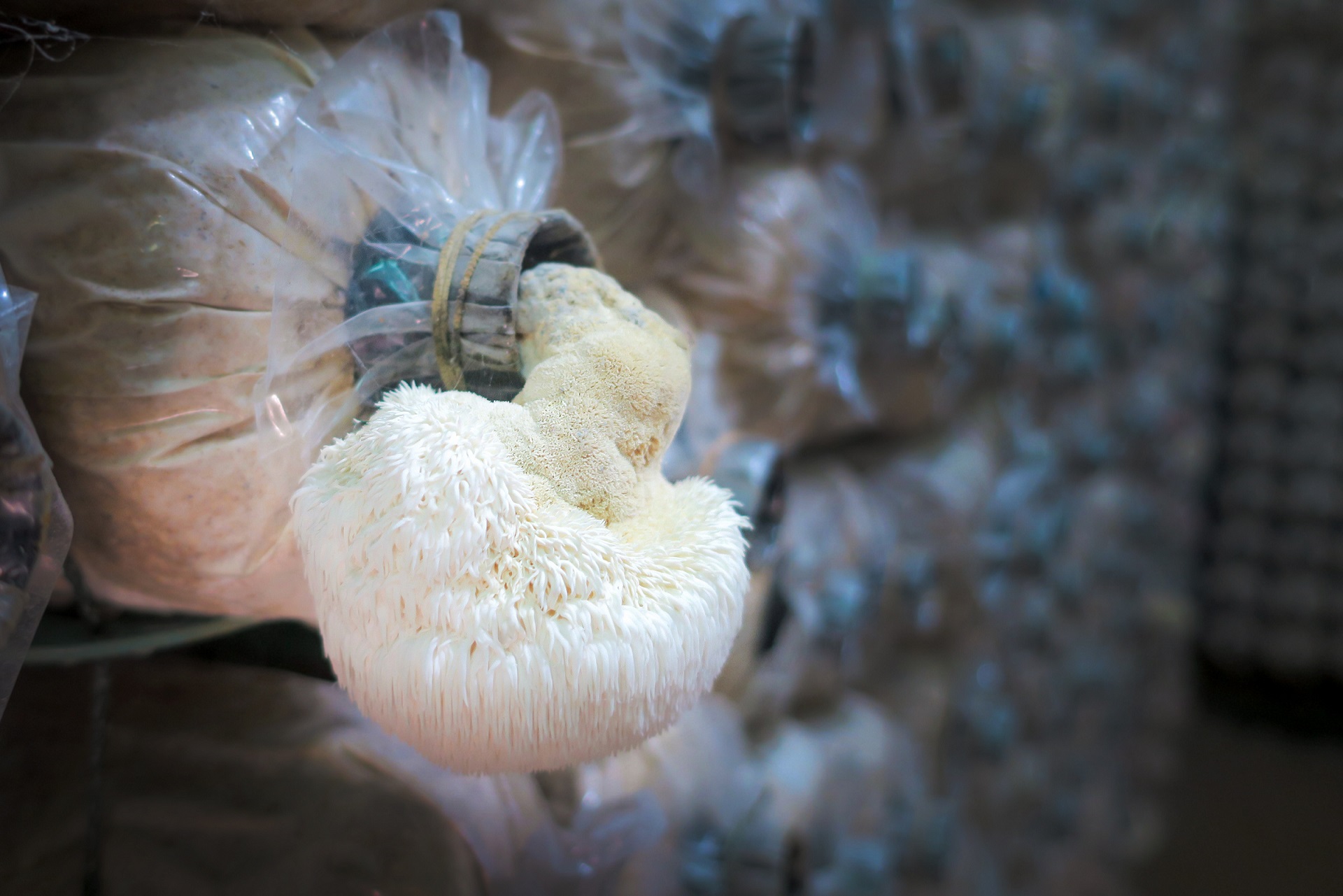 Lion’s mane is an edible mushroom which is currently being investigated for its potential cognitive benefits. Plus, animal studies have uncovered several other future avenues for human trials. What have researchers found? Read on to learn more.

What is Lion’s Mane Mushroom?

It has been used in traditional Chinese and Japanese medicine throughout history. It is also commonly consumed in many other Asian countries such as Korea and India [3, 1, 4].

Apart from vitamins and minerals, Lion’s Mane also contains some specific compounds such as hericerins, erinacines, erinaceolactones, and specific glycoproteins and polysaccharides [5].

All of these beneficial effects are based on three important properties of this mushroom: it decreases inflammation, acts as an antioxidant, and stimulates the immune system [6].

Lion’s mane is an edible mushroom which has been a part of traditional medicine for many centuries. Modern research has been investigating its potential medical benefits.

Lion’s Mane can both increase and decrease pro-inflammatory cytokines depending on the context.

The following purported benefits are only supported by limited, low-quality clinical studies. There is insufficient evidence to support the use of lion’s mane for any of the below listed uses. Lion’s mane has not been approved by the FDA for any medical purpose or health claim.

The following purported benefits are only supported by limited, low-quality clinical studies. There is insufficient evidence to support the use of lion’s mane for any of the below-listed uses. Remember to speak with a doctor before taking lion’s mane, and never use it in place of something your doctor recommends or prescribes.

In 50- to 80-year-old Japanese men and women diagnosed with mild cognitive impairment, lion’s mane improved cognitive function. However, cognitive function decreased again after the termination of the treatment, and therefore continuous intake may be necessary [23].

In a study of mice with neurodegenerative diseases, lion’s mane improved both memory and cognitive function [4, 24].

Lion’s mane has anti-dementia activity in a mouse model of Alzheimer’s disease and in people with mild cognitive impairment [25, 26].

In a mouse model of Alzheimer’s, lion’s mane improved cognitive function and the brain cholinergic system function. It enhanced both acetylcholine and choline acetyltransferase (ChAT, an enzyme that produces acetylcholine) concentrations in the blood and in the hypothalamus [24].

In mice with Alzheimer’s, lion’s mane prevents the loss of spatial short-term and visual recognition memory [4].

In a similar setting, lion’s mane decreased the amyloid beta plaque burden in the brain. The plaque contributes to brain degradation in patients with Alzheimer’s [25].

It was shown that lion’s mane components protect neurons from amyloid beta-induced neurotoxicity [27].

Lion’s mane has not yet been studied in the specific context of Alzheimer’s or Parkinson’s disease in humans, and clinical evidence in the context of brain function is very limited. Talk to your doctor before using lion’s mane, and never use lion’s mane in place of a prescribed medication.

In a few clinical studies, lion’s mane mushroom has improved cognitive function. Animal research is currently under way to investigate its potential in Alzheimer’s and Parkinson’s diseases, but these have not progressed to human trials.
Feeling Extra Stress? Get 36 Natural Remedies To Reduce Anxiety

In a four-week study, menopausal symptoms such as loss of concentration, irritability, palpitations, and anxiety significantly decreased when treated with Lion’s Mane extract. This alleviation of symptoms also improved sleep quality [29].

Amycenone, a lion’s mane component had antidepressant effects in mice [10].

One clinical study has found that postmenopausal women who took lion’s mane extract experienced less severe mood symptoms than those who didn’t.

No clinical evidence supports the use of lion’s mane for any of the conditions listed in this section. Below is a summary of the existing animal and cell-based research, which should guide further investigational efforts. However, the studies listed below should not be interpreted as supportive of any health benefit.

Lion’s mane enhanced nerve growth and regeneration in animal models, both in the brain and throughout the rest of the body [30, 2, 31, 30].

These effects have yet to be investigated in humans.

Compounds found in lion’s mane improved immune function in mice. A polysaccharide from the mushroom enhanced both cell-mediated and humoral immunity; the authors suggested that the polysaccharide could regulate immune cell activity in the intestinal wall [33].

Researchers have yet to conduct clinical trials investigating the effect of lion’s mane on the human immune system.

Animal and cell studies have suggested a possible role for lion’s mane in stimulating the immune system.

In rats, wounds treated with lion’s mane extract scarred less and contained more collagen, but this result has yet to be repeated in other studies [37].

In rats with brain injury, lion’s mane extracts reduced the size of the injury and decreased levels of inflammatory cytokines [12].

In animals and cells, lion’s mane has significantly reduced inflammation. The clinical relevance of these results is unknown.

The observed decreased in cholesterol in animals fed lion’s mane may be related to increased bacterial short-chain fatty acid production in the large intestine. Other possible factors include an accelerated rate of degradation of cholesterol to bile acids or a reduced ability to absorb fat [2, 40].

Lion’s mane has not been investigated as a potential cholesterol-lowering agent in humans.

Researchers have not yet investigated whether lion’s mane can affect blood sugar or neuropathy pain in people with diabetes.

In a cell study, a lion’s mane compound called hericenone B inhibited human and rabbit platelet aggregation, suggesting a possible role for lion’s mane in preventing clots. For the time being, lion’s mane should not be used in an attempt to stop blood clotting; however, we recommend caution with lion’s mane if you are taking any medication that thins the blood [43].

Lion’s mane inhibited the growth of H. pylori in several cell studies. This activity has not been investigated in an animal model, let alone in humans [46, 47, 48].

Lipofuscin is a waste product of human and animal aging metabolism. It is constantly accumulating in as cells age, contributing to cell atrophy (wasting). In both mice and flies, lion’s mane polysaccharides significantly reduced lipofuscin content [2].

Animal studies suggest a potential role for lion’s mane in healthy aging of the metabolism and skin.

Moreover, lion’s mane compounds inhibited the production of osteoclasts, cells that break down bone tissue, in the laboratory [54].

Lion’s mane extracts decreased wakefulness at the end of the active phase in mice. Furthermore, some components of lion’s mane can advance the sleep-wake cycle [55].

A lectin found in lion’s mane inhibits HIV-1 reverse transcriptase activity, which is important for the HIV virus to reproduce itself [56].

Lion’s mane possesses antioxidant properties; a boiled decoction of the mushroom had antioxidant activity in a dish which was about 17% as strong as quercetin [57].

The potential applications of this antioxidant activity are currently unclear.

As early as 1992, studies reported that components of lion’s mane showed antitumor activity in animal studies. These components prolonged longevity and reduced the mortality of animal hosts [2].

Lion’s mane promotes the Th1 response, which is important for fighting tumors [2].

Researchers are currently investigating the effect of lion’s mane on several specific types of cancer cells, including [60, 61, 2, 62]:

There is currently nowhere near enough evidence to recommend lion’s mane for the prevention or treatment of cancer, but research is ongoing.

Lion’s mane is an edible mushroom, which is considered relatively safe when cooked and consumed in small amounts. There is currently no safety data concerning the use of lion’s mane extracts.

However, in humans, a single case of allergic contact dermatitis, and one case of acute respiratory failure associated with this mushroom were registered [63, 64].

There is also no safe and effective dose of lion’s mane because no sufficiently powered clinical trial has been conducted to find one. Talk to your doctor before using lion’s mane supplements.

Lion’s mane is an edible mushroom which has been a part of traditional medicine for many centuries. Modern research has found a potential use for lion’s mane in brain function and mood, while animal research suggests that it may modulate immunity and metabolism. Most of the available studies have been limited to animals and cells.

Lion’s mane is considered safe to eat as food, but safety data for lion’s mane at supplemental doses is incomplete.