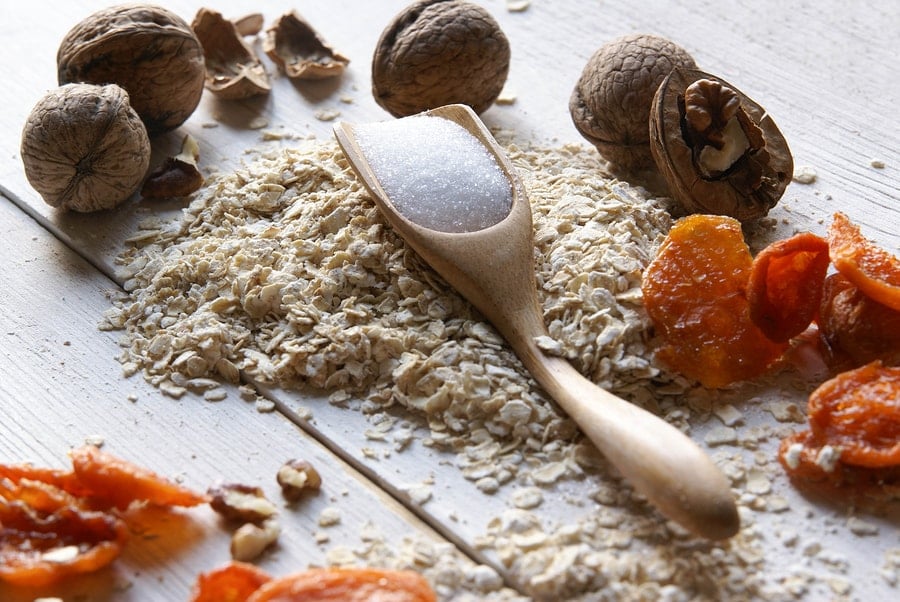 Erythritol is a popular sugar substitute that contains zero calories. It is a tooth-friendly additive that may be suitable for obese people and diabetics. But is there a downside to its use? Keep reading to learn the benefits, dosage, and side effects of erythritol.

Erythritol is a low-calorie sweetener that tastes almost exactly like sugar. It belongs to the family of sugar alcohols (polyols) and is used in the food and pharmaceutical industries [1].

Scottish chemist John Stenhouse discovered it in 1848. It was approved by the FDA as a food additive in 2001 [2].

Although erythritol is 60-80% as sweet as table sugar, it has 95% fewer calories per gram. It also has fewer calories than other sweeteners like xylitol, mannitol, and sorbitol [3].

Even though erythritol occurs naturally in small amounts in fruits and vegetables, it’s actually produced in the industry by fermenting glucose [4].

It’s more difficult to produce erythritol than other sweeteners. Currently, researchers are trying to use other bacteria or fungi to optimize the fermentation process [1].

Erythritol brings about the sensation of sweetness by activating sweet-taste receptors in the tongue, like other sweeteners. These receptors are activated in the brain, which stimulates reward, and in the gut, which may increase the breakdown of fats [5, 6, 7, 8, 9].

Due to its small size, erythritol is taken in by the small intestine faster than other common sweeteners (like xylitol and mannitol) [10].

The body can’t break down the majority of erythritol – we lack the enzymes needed to do this. That’s why erythritol is excreted in the urine unchanged [10, 11].

Since erythritol travels through the body intact, it doesn’t raise sugar and insulin levels in the blood. Erythritol is well-tolerated and does not produce significant toxic effects in the body [10].

In one study of 485 children consumed erythritol, xylitol, or sorbitol 3 times a day for 3 years. Erythritol prevented tooth decay compared to the other sweeteners [12, 13].

In another study, 136 teenagers received a daily dose of either xylitol, erythritol, or sorbitol over 6 months. Erythritol and xylitol greatly reduced dental plaque [14].

2) May Not Cause Diarrhea and Digestive Upset

Erythritol is rapidly taken in by the small intestine. Because it doesn’t stay in the gut for long, it can’t attract water – the main cause of watery diarrhea from sweeteners [16].

This is why erythritol causes diarrhea less frequently than other sweeteners like xylitol [16].

55 adults were given erythritol, xylitol, and lactitol in increasing doses and stopped at the dose that caused diarrhea. The dose at which erythritol causes diarrhea was higher than for other sweeteners [17].

In another study, 185 children aged 4 to 6 years consumed different doses of erythritol. Even up to 15 g of erythritol did not cause diarrhea or other gut-related problems. Only doses of 20 and 25 g caused diarrhea [18].

3) Does Not Raise Blood Sugar or Insulin (Good for Diabetics)

In a pilot study, 5 healthy males received either erythritol (0.3 g/kg body weight) or the same amount of glucose. Erythritol did not change blood levels of glucose or insulin. More than 90% of ingested erythritol was quickly taken up by the body and excreted unchanged through urine [20].

In another study, 10 lean and 10 obese subjects were given different doses of erythritol, glucose, and xylitol. Erythritol did not alter blood insulin and glucose levels, making it a suitable sweetener for obese people [21].

20 g of erythritol was given to diabetic patients as a single-dose or daily for 2 weeks. Neither of the erythritol doses had any effect on blood glucose levels [22].

More well-designed studies are needed to confirm the safety and advantages of erythritol as a sugar substitute.

The main goal of a keto diet is to reduce carbohydrate consumption as much as possible by excluding foods such as bread, pasta, and sugar [25].

Erythritol has a glycemic index of 0, meaning that its consumption doesn’t have any effect on a person’s blood sugar level. Its glycemic index is also the lowest among other sweeteners [27].

Usually, erythritol doesn’t have any side effects and is well tolerated in adequate amounts. However, if consumed in excess (50+ grams), it may cause digestive upset and diarrhea [28, 17].

In a study of 264 university freshmen, those who gained weight and fat around the waist over 9 months had high blood levels of erythritol at the start of the year, suggesting a possible association between erythritol and weight gain. This was the first study to show that erythritol is made from glucose in the body and may contribute to weight gain risk [29].

It’s not sure whether oral consumption of erythritol would have the same effect.

Some people may be allergic to erythritol. One woman had an allergic reaction (red, raised, itchy bumps on her skin) after she drank a glass of canned milk-tea, which contained erythritol (case study) [30].

Erythritol and Other Sweeteners

Both stevia and erythritol don’t contain any calories [32, 15].

Stevia is generally safe, and the acceptable daily intake of stevia is 4 mg/kg body weight. There isn’t a standardized dose for erythritol consumption; however, daily consumption of 35 g has proven to be safe and free of side effects [33, 28].

Both sweeteners are considered to be safe for diabetic people, as neither of them increases blood sugar levels [34, 22].

Unlike erythritol, xylitol has a glycemic index of 13, meaning that it can raise blood sugar levels. It also has a caloric value of 2.4 kcal/g, which is 12 times more than erythritol [27].

In a study, 37 healthy adults consumed beverages containing fructose and glucose, fructose and erythritol, or only fructose. Combining erythritol and fructose worsened digestive symptoms such as diarrhea and stomach discomfort [35].

When fructose is not well absorbed in the small intestine, digestive problems occur. Erythritol blocks fructose absorption, leading to problems like diarrhea and stomach rumble [36].

Erythritol is most commonly available as tablets and granulated powders. It is also found as a sweetener in chewing gums, syrups, and oral health products [3].

There is no standardized dose for erythritol use. Still, digestive symptoms like diarrhea and stomach upset are possible after taking 50 g of erythritol in a single dose. Daily consumption of 35 grams of erythritol is considered safe with no risk of side effects [28].

Consult your doctor before using erythritol routinely, as the safety of long-term use has not been established and allergic reactions may occur [30].

Many users stated that erythritol is a good sugar alternative when preparing drinks and desserts because of its low calories. They also liked that it was the closest sweetener to table sugar with no aftertaste.

Diabetic users stated that thanks to erythritol, they can enjoy the privilege of sweet products without the concern of increasing their blood sugar levels.

Some users reported no stomach or digestive problems with erythritol use.

Even though there aren’t many negative reviews regarding the side effects of erythritol, a lot of people complain that it lacks sweetness compared to other sugar substitutes such as stevia.

In the midst of the Coronavirus pandemic, we’ve got to do everything we can to keep our bodies as healthy as possible. SelfDecode’s personalized DNA reports can tell you which vitamins and mineral deficiencies you’re susceptible to, and which foods to consume to prevent these deficiencies. Start your journey to optimal health with SelfDecode today.