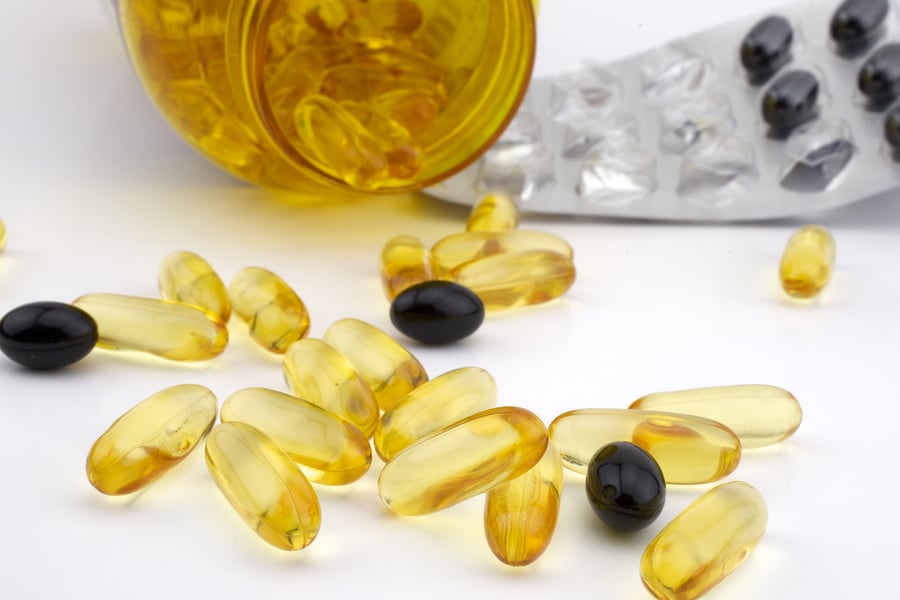 Krill oil is a great source of omega-3 fatty acids EPA and DHA. It can improve blood lipids, help with diabetes, and protect the eyes and joints. It offers similar benefits to fish oil and certain advantages, but there are important limitations to consider. Keep reading to learn more about krill oil benefits, safety profile, and optimal doses.

What is Krill Oil?

Krill can be made into oil, powder, and protein concentrate products. Krill oil is a sustainable source of omega-3s; it is high in protein and low in saturated fat [1, 2].

People use it for high blood lipids, heart health, cognitive and mental improvement, immunity, and more. Results from animal studies provide valuable information on this supplement, but clinical evidence is limited [1].

The fat content of krill oil ranges from 12 to 50% of its total weight. In the spring, krill’s fat content is lower because of the lack of food and is higher in the summer and fall when food is abundant [2].

The phospholipids (fats with a phosphate group) in krill oil protect membranes from free radicals and prevent cell damage [3].

Other fatty acids in krill oil include [4]:

Additionally, krill oil contains astaxanthin, a fat-soluble pigment and powerful antioxidant. However, astaxanthin levels in krill oil may be too low to provide health benefits [2].

Although reduced endocannabinoid activity in the brain can be harmful, krill oil does not cause any negative cognitive effects [1].

Krill oil reduced cholesterol in healthy rats, rats with high levels of fat in the blood, and rats fed a high-cholesterol diet [1, 7].

Compared to fish oil, the level of clinical evidence is still insufficient for any definite conclusions.

In another study of 50 patients, krill oil improved mild knee pain and range of motion [8].

In another mouse study, it reduced arthritis symptoms and development but did not lower inflammatory cytokines [9].

It reduced blood glucose levels and improved glucose tolerance and insulin sensitivity in a couple of animal studies [12, 13].

No valid clinical evidence supports the use of krill oil for any of the conditions in this section. Below is a summary of up-to-date animal studies, cell-based research, or low-quality clinical trials which should spark further investigation. However, you shouldn’t interpret them as supportive of any health benefit.

In a study of 90 heart disease and arthritis patients, krill oil reduced C-reactive protein, a major marker of inflammation [3].

Astaxanthin in krill oil blocks nitric oxide and TNF-alpha production. However, astaxanthin levels in krill oil may be too low to provide health benefits [1, 3, 2].

Omega-3s from krill oil help protect the brain. DHA is essential for brain development and EPA improves behavior and mood [17].

Phospholipids from krill oil have antioxidant and anti-inflammatory properties. They reduce oxidative damage in the brain and help prevent cognitive decline and mental disorders [17, 18].

In a study of 45 elderly males, krill oil enhanced the function of brain areas that perform calculations and working memory tasks. The authors underlined higher phospholipid content as a potential advantage of krill over fish oil. However, the clinical significance of these results is not clear [19].

In a study of 70 young women, krill oil significantly reduced pain and improved the emotional symptoms of PMS, such as stress, depression, and irritability [20].

More research is needed to verify the beneficial effects of krill oil on PMS symptoms.

In two studies of healthy volunteers (115 and 12 participants), the krill oil group absorbed more EPA than the fish oil group. However, DHA absorption was the same [21, 22].

Krill oil also contains astaxanthin, a pigment that protects the unsaturated bonds in EPA and DHA from oxidative damage [2, 24].

Additionally, the major concern of fish oil is its mercury content. Krill oil is generally cleaner and less polluted than fish oil, but this greatly depends on the source and product manufacturer [26, 27].

Krill oil is more expensive than fish oil because it must be immediately processed to prevent spoiling [25].

Given this risk of spoiling and the lack of rigorous safety controls, krill oil quality might not be as good as prescription fish oil [25].

Additionally, krill oil is relatively new on the market. It has less clinical evidence backing up the health benefits and a less known safety profile. The American Heart Association does not yet recognize krill oil as an omega-3 supplement [25, 24].

Krill oil is possibly safe in doses up to 4 grams, when used up to 3 months. Common side effects are mild and include [28, 29]:

People who are allergic to crustaceans and shellfish (shrimp/crabs) may experience adverse reactions [6].

Storage can cause krill shells to increase fluoride levels and their effects on human health are not clear yet [30].

Krill oil might increase the effectiveness of blood thinners and may, in theory, increase the risk of bleeding [6, 31].

In mice, krill oil decreases genes responsible for liver glucose production (SLC2A2 and PCK1). However, it did not decrease blood glucose levels [32].

The below doses may not apply to you personally. If your doctor suggests using krill oil, work with them to find the optimal dosage according to your health condition and other factors.

Currently, there is no recommended dose for krill oil. Safe and effective doses in clinical trials ranged from 1-3 g daily [3, 6].

The American Heart Association recommends 250 to 500 mg of EPA + DHA each day. The amount of fatty acids in krill oil depends on the type and brand but typically ranges between 180 and 250 mg EPA and DHA (combined) per capsule [24, 1].

On the other hand, some folks still complain about these side effects and can’t tell a difference between krill and fish oil.