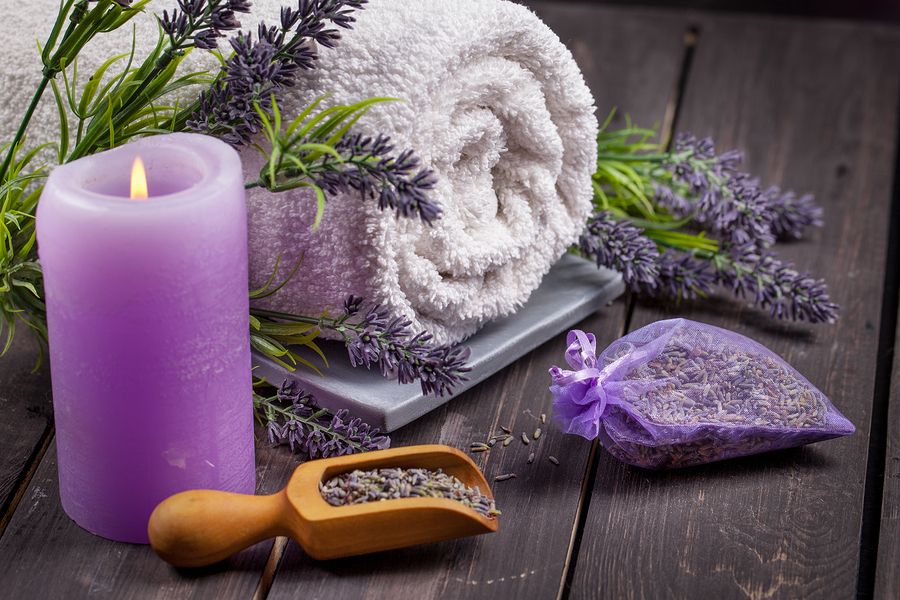 Lavender is commonly used in cosmetic products such as soap and shampoo for its fragrance, but it also has many health benefits that are not as widely known. Lavender can be used to reduce anxiety, improve sleep, and manage pain. Keep reading to learn more about its beneficial effects.

Lavender (Lavandula) is a group of plants native to southern Europe, northern and eastern Africa, southwest Asia, and southeast India.

Historically, lavender has been used for medical purposes. In the medieval era, physicians used lavender to treat epilepsy and migraine attacks [1].

Lavender essential oil can be taken orally, inhaled as a mist, or applied topically as an oil or lotion.

Linalool creates anti-conflict effects while both linalool and linalyl acetate cause sedative effects [1].

Linalool and linalyl acetate, some of the lavender’s main constituents, have anti-inflammatory and antioxidant properties [4, 1].

Lavender has not been approved by the FDA for medical use; extracts and oils generally lack solid clinical research. Regulations set manufacturing standards for them but don’t guarantee that they’re safe or effective. Speak with your doctor before supplementing.

Lavender increased heart rate variability, which signals a higher stress tolerance, in 67 middle-aged women. However, this effect only lasted a short time [7].

In mice, taking lavender oil orally alleviated their anxiety via N-type and P/Q-type voltage-dependent calcium channels. They inhibited the hippocampus, a region of the brain important for anxiety disorders [8].

In a study of 140 women who recently gave birth, their anxiety, stress, and postpartum depression levels were significantly lower when they inhaled lavender daily [9].

The following purported benefits are only supported by limited, low-quality clinical studies. There is insufficient evidence to support the use of lavender for any of the below-listed uses. Remember to speak with a doctor before taking lavender or using lavender oil, and never use it in place of something your doctor recommends or prescribes.

Lavender inhalation can help with insomnia and improve sleep quality by reducing the stress responses, lowering resting heart rate and increasing the variability between heartbeats in the short-term.

Scientists examined the brain activity of 10 healthy women who were exposed to lavender odor. A brain imaging study showed that lavender increases both brain arousal and feelings of relaxation [14].

Aromatherapy with lavender, rosemary, lemon, and orange essential oils increased cognitive function in a study of 17 elderly patients with Alzheimer’s [15].

Rats that were injected with lavender oil demonstrated neuroprotective activity against strokes caused by insufficient blood flow to the brain and alleviated neurological symptoms [17].

Lavender oil improved the motor coordination and motor function in rats through the enhancement of dopamine receptors. Dopamine is responsible for movement and emotions [18].

Lavender essential oil applied topically to the insertion area of a needle reduced the intensity of the pain caused by needle insertion in 30 healthy volunteers and 34 dialysis patients [24, 25].

In two studies, lavender used in an aromatherapy massage to the stomach region significantly reduced the severity of menstrual cramps [26, 27].

However, the relative effect of the lavender oil and the massage is unknown.

In a controlled trial of 47 patients, the inhalation of lavender oil significantly reduced headache severity compared to placebo [28].

In a study of 86 balding patients, the group that massaged a mixture of essential oils (lavender, thyme, rosemary, and cedarwood) onto their scalp experienced an improvement in hair loss symptoms [29].

No clinical evidence supports the use of lavender for any of the conditions listed in this section. Below is a summary of the existing animal and cell-based research, which should guide further investigational efforts. However, the studies listed below should not be interpreted as supportive of any health benefit.

In rats, lavender oil prevented inflammation and allergic reactions when applied either topically or through injections [32].

Lavender also suppressed inflammation in the lungs and prevented bronchial asthma in mice [33].

Lavender is available as a dried whole or powdered herb, extract, or essential oil. Whole lavender is considered safe to consume as food, but not all preparations of lavender oil are appropriate for consumption by mouth; read any instructions carefully before administering lavender.

High concentrations of lavender oil can be toxic to human skin cells [35].

If left exposed to air, lavender oil oxidizes to form chemicals that are irritating to the skin. It can cause skin rashes [36].

Common side effects include:

To avoid adverse effects or unexpected interactions, talk to your doctor before using lavender extracts or oils.

Although short-term therapy with lavender is considered safe, relatively little is known about its long-term effects on humans. More long-term studies and clinical trials are needed before lavender’s efficiency can be determined.