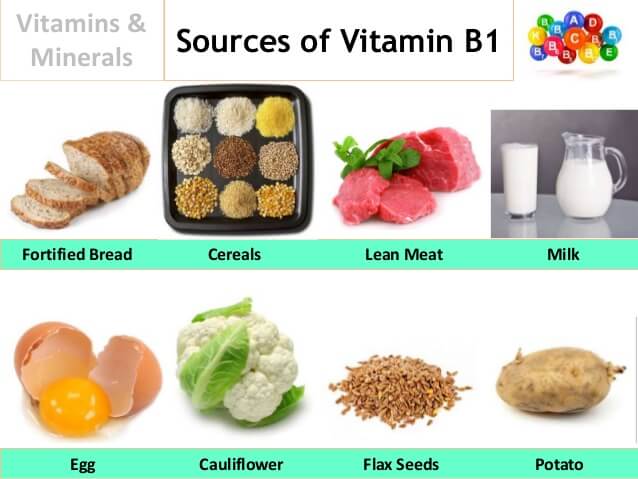 Thiamine, or Vitamin B1, is an essential nutrient required by the body. It has many health benefits, from protecting the brain and heart to boosting the immune system.

What is Vitamin B1 (Thiamine)?

Thiamine, also known as Vitamin B1, is essential for every tissue in the body. It is a cofactor for enzymatic reactions in the skeletal muscles, heart, liver, kidney, and brain [1].

Ingested Vitamin B1 from food and dietary supplements is absorbed by the small intestine through active transport at nutritional doses and by passive diffusion at pharmacological doses [1].

Most dietary Vitamin B1 is in phosphorylated forms, and intestinal phosphatases hydrolyze them to free thiamine before the vitamin is absorbed. Humans store thiamine primarily in the liver, but in very small amounts [2].

The body needs Vitamin B1 to make ATP, the body’s main energy-carrying molecule.

Thiamine helps in the conversion of carbohydrates into glucose, which is the preferred source of energy that the body runs off of to keep your metabolism running smoothly. It also helps break down proteins and fats [3].

Thiamine is specifically needed for a system of enzyme reactions called pyruvate dehydrogenase, which works to metabolize sugars that we eat [4].

Thiamine (as thiamine diphosphate, the main active form of the vitamin) is essential to glucose metabolism [5].

The proportion of people with type 1 or type 2 diabetes who have low thiamine ranges from 17% to 79%. Studies have found that increasing Vitamin B1 intake decreases the severity of symptoms associated with early-stage diabetes [6].

Like other B-complex vitamins, Vitamin B1 is sometimes called an “anti-stress” vitamin because it may strengthen the immune system and improve the body’s ability to withstand stressful conditions [7].

Vitamin B1 appears to help with the development of the myelin sheath, a coat that wraps around nerves to protect them from damage and death [9].

In the brain, it is required both by the nerve cells and by other supporting cells in the nervous system [10].

Autopsy studies have shown that thiamine-dependent enzymes have decreased activity in the brains of people with Alzheimer’s disease [11].

Some researchers suspect that vitamin B1 therapy might have a favorable impact on neurodegenerative diseases such as Parkinson’s, Alzheimer’s, and Huntington’s disease [13].

Further research needs to be done before any conclusions can be made about whether it can help people with neurodegenerative conditions.

Thiamine is vital to the function of the cardiovascular system, and thiamine deficiency can cause congestive heart failure [5].

In a review of 20 clinical studies, supplementation with thiamine improved cardiac function in people with heart failure [14].

Recent studies suggest that thiamin may lower the risk of developing cataracts. These studies show that people who ingest plenty of protein along with vitamins A, B1, B2, and B3 (or niacin) in their diet are less likely to develop cataracts. Getting enough vitamins C, E, and B-complex vitamins further protect the lens of the eye (16).

Thiamine is also necessary for the proper functioning of the digestive system. Vitamin B1 helps to regulate the production of hydrochloric acid, which is needed for maintaining proper digestive function [17].

Thiamine deficiency is the established cause of Wernicke–Korsakoff syndrome (WKS), an alcohol-linked neurological disorder. Alcohol consumption can damage the brain through numerous mechanisms; one of these mechanisms involves the reduced availability of Vitamin B1 to the brain as a consequence of continued alcohol consumption [10].

Thiamine deficiency causes beriberi. Some of the symptoms include swelling, tingling, or burning in the hands and feet as well as trouble breathing because of fluid in the lungs [18].

People in developed countries do not usually get beriberi because staple foods such as cereals and bread are fortified with vitamin B1 [5].