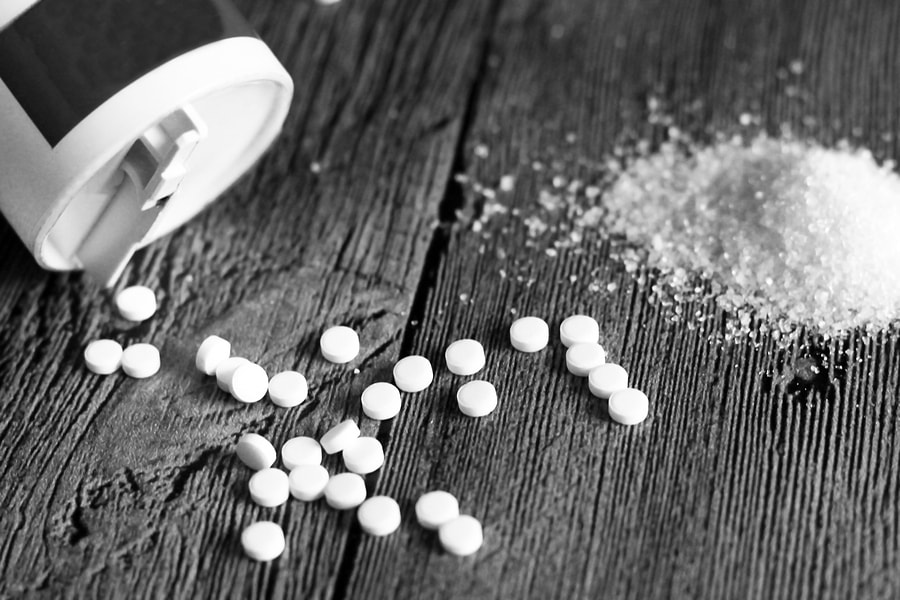 Allulose, also known as D-psicose, is a rare sugar that tastes just like white sugar, but only has 1/10 of its calories. It has potential anti-obesity and antidiabetic properties. In animal studies, it also protected from oxidative stress, inflammation, and fatty liver disease. Read on to discover the potential benefits of allulose and whether you should incorporate it into your diet.

Allulose is a rare sugar that occurs in small quantities in nature. It belongs to a group of simple sugars called monosaccharides, which includes fructose and glucose. However, allulose only contains 1/10 of the calories of these 2 sugars. It does, however, maintain a similar taste and texture [1, 2].

Industrially, allulose is produced from fructose. It can be purchased as a sweetener to substitute sugar in the diet [2].

Due to its low calorie content, allulose may benefit people suffering from obesity, diabetes, and may promote overall weight loss. Additionally, it may have antioxidant properties and reduce inflammation [1].

Natural Sources and Forms of Supplementation

Allulose occurs in small quantities in wheat and in the Itea plant genus [3, 4, 5].

Today, it is mostly made industrially from fructose by using bacteria and is available in the form of sweetener or a food additive (honey or maple syrup) [7, 8].

Allulose is quickly flushed with the urine and cannot penetrate the blood-brain barrier. Therefore, direct action on the central nervous system is not possible [9].

Allulose acts mainly through the release of GLP-1 (Glucagon-Like Peptide-1). GLP-1 is produced by the large bowel. This hormone circulates in the blood and binds to receptors in the brain, pancreas, gut, and kidneys [10, 11].

Allulose decreases the amount of liver fat by [17]:

In a 12-week trial on 26 people (15 prediabetic and 11 healthy), a single ingestion of 5 g of allulose decreased post-meal glucose spikes in those with borderline diabetes. The long-term (12 weeks) intake of allulose did not cause any side effects [15].

In the most recent clinical trial, allulose (5 or 10 g) reduced blood sugar spikes after the ingestion of glucose (75 g) in 24 people with type 2 diabetes [27].

However, this sugar was ineffective in a similar trial conducted on 27 healthy people [28].

In diabetic and healthy mice, allulose lowered general blood glucose down to normal levels without causing hypoglycemia in healthy animals. It also alleviated the post-meal glucose spike in both healthy and diabetic animals [18].

HbA1c, or glycated hemoglobin, is formed from a reaction between hemoglobin A and blood glucose. It is used as an indicator of poor blood sugar control [30, 31, 32].

In obese rats with type 2 diabetes, allulose decreased the level of HbA1c by maintaining normal blood sugar levels during eating and fasting [33].

Although the evidence suggests that allulose may help lower blood sugar spikes in people with diabetes or at risk of developing this condition, it’s based on very few trials on small populations and some animal research. Larger, more robust clinical trials are needed to confirm these preliminary findings.

In a clinical trial on 121 overweight people, allulose significantly reduced body mass index and fat in the stomach and waist [34].

In another trial on 13 healthy, normal-weight people, allulose promoted fat burning after meals. This suggests that it could help maintain a healthy weight by promoting energy usage [35].

In multiple mouse studies, allulose decreased fatty tissue in both obese and leptin-deficient mice. This effect was mediated by the release of GLP-1. Allulose use also corrected diabetes, fatty liver disease, and overeating [13, 36].

High-fat diet-fed mice supplemented with allulose had ~50% less fat in the belly area and body [17].

In mice fed a high-fat diet, allulose decreased fat synthesis and absorption in the small intestine. Additionally, it increased the removal of fats from the body (fecal excretion) [17].

In cell studies, the direct application of allulose prevented fat cells from replicating [36].

Again, the results are promising but the evidence comes from 2 clinical trials and some research in animals and cells. More clinical trials are needed to support the use of allulose as a weight-loss aid.

No clinical evidence supports the use of allulose for any of the conditions listed in this section. Below is a summary of the existing animal and cell-based research, which should guide further investigational efforts. However, the studies should not be interpreted as supportive of any health benefit.

In rats with testicular injury, allulose-infused water (2% allulose) given for 14 days prevented the production of reactive oxygen species (ROS) and the progression of testicular damage. Additionally, allulose increased the levels of antioxidant proteins (glutathione peroxidase 1 and 2, and glutaredoxin 1) [38].

Type 2 diabetes is caused by a failure of beta-cells in the pancreas to respond to glucose levels. In rats with type 2 diabetes, oral allulose reduced the production of inflammatory molecules IL-6 and TNF-alpha. It also increased the production of glutathione (GSH), an antioxidant that plays a protective role in the body and helps alleviate cell damage [33].

In mice fed high-fat diets, allulose decreased the amount of fat buildup in the liver when given for 16 weeks. The sugar reduced the activity of enzymes responsible for fat synthesis (fatty-acid synthase, acetyl-CoA carboxylase 1, and phosphatidate phosphatase) while increasing fat breakdown (beta-oxidation) [17].

In obese mice, allulose decreased the liver triglyceride levels after 5 weeks of supplementation [18].

In cells, the antibiotic metronidazole was more efficient in stopping the growth of a protozoa that affects cats and cattle (Tritrichomonas foetus) when combined with allulose than metronidazole alone. This suggests allulose may prove useful in overcoming antibiotic resistance to metronidazole [41].

Keep in mind that the safety profile of allulose is relatively unknown, given the lack of well-designed clinical studies. The list of side effects below is not a definite one and you should consult your doctor about other potential side effects based on your health condition and possible drug or supplement interactions.

Based on this and other studies, the FDA warned that doses above 35 grams per day may cause gastrointestinal discomfort [43].

The main limitation is the lack and small size of clinical trials. Since most of the studies were carried out on animals, there is insufficient evidence to support all the potential benefits of allulose until more clinical research is conducted.

Dosages used in human studies were lower than those of animal studies. Humans were served up to about 0.2 g of allulose/kg, while animals were given 0.2 to 3.0 g of allulose per kilogram of body weight. The observed benefits in animal models may be attributed to the increased dose of allulose.

Because allulose is not approved by the FDA for any condition, there is no official dose. Users and supplement manufacturers have established unofficial doses based on trial and error. Discuss with your doctor if allulose may be useful as a complementary approach in your case and which dose you should take.

The FDA recommends doses below 35 g/day to avoid stomach discomfort. You can use allulose in place of sugar in your everyday food and drink. For all recipes that call for a certain amount of sugar, you can substitute the same amount of allulose instead [43].

The opinions expressed in this section are solely those of allulose users, who may or may not have medical or scientific training. Their reviews do not represent the opinions of SelfHacked. SelfHacked does not endorse any specific product, service, or treatment.

Most users who incorporated allulose sweetener in their diets to replace sugar as a sweetener. They were generally satisfied with its low calorie count and ease to digest and dissolve.

The most common complaint was its high price. Other users noted that allulose provides only 70% of the sweetness of granulated sugar, meaning it requires higher amounts.

Users of allulose honey claimed that it was indistinguishable from normal honey and found it a great sugar replacement.