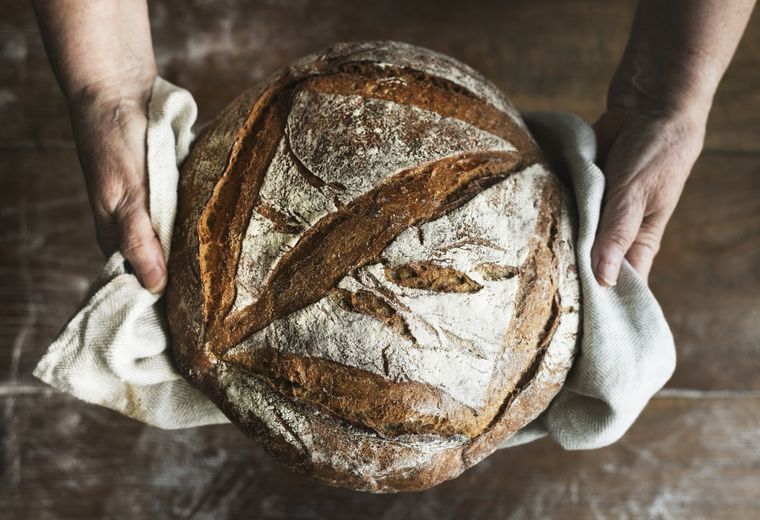 When prepared the right way, can sourdough bread be tolerated by those with celiac disease and even heal the gut? Studies suggest that it could be possible. Sourdough provides a possible bread option for gluten-sensitive individuals. Scientific research on the removal of gluten and safety for celiac patients is presented here.

I previously spoke about the benefits of sourdough and lactate. This post gathers our current information on the sourdough fermentation process on gluten.

Out of the dozens of types of bread that I’ve tried, there was one sourdough that I seemed to do better on (though it still gave me issues).

I then came upon research that suggests that certain kinds of sourdough fermentation processes degrade gluten, which was interesting given my seemingly positive experience with Berlin’s Bakery sourdough bread.

The problem is I haven’t found any bakery that has confirmed the usage of the processes described in the studies, so it’s impossible to know which, if any, sourdough has no or little gluten.

After more careful experimentation with Berlin’s Bakery bread, however, I realized, that they’re some lectins like WGA or gluten left in the bread and I’m still sensitive to it, albeit much less than all other sourdough’s and gluten-containing bread.

I realized that if I let it defrost for 24 – 48 hours, I would do even better on it. Since I’m very sensitive to gluten, I decided to cut it out of my diet.

I’d recommend sourdough bread, particularly the one by Berlin’s Bakery, to those who aren’t sure if they are gluten sensitive.

The snippets from the studies below have been edited to make them more readable. They are listed in chronological order by study release dates from 2004 – 2012.

Gluten hydrolysis and depolymerization during fermentation.

Tolerated by celiac spruce patients if made from wheat and nontoxic flours and started with selected lactobacilli.

This work was aimed at producing a sourdough bread that is tolerated by celiac sprue (CS) patients. Selected sourdough lactobacilli had specialized peptidases capable of hydrolyzing Pro-rich peptides, including the 33-mer peptide, the most potent inducer of gut-derived human T-cell lines in CS patients. A sourdough made from a mixture of wheat (30%) and nontoxic oat, millet, and buckwheat flours was started with lactobacilli. After 24 h of fermentation, wheat gliadins and low-molecular-mass, alcohol-soluble polypeptides were hydrolyzed almost totally. Proteins were extracted from sourdough and used to produce a peptic-tryptic digest for in vitro agglutination tests on K 562(S) subclone cells of human origin. The minimal agglutinating activity was ca. 250 times higher than that of doughs chemically acidified or started with baker’s yeast. Two types of bread, containing ca. 2 g of gluten, were produced with baker’s yeast or lactobacilli and CE and used for an in vivo double-blind acute challenge of CS patients. Thirteen of the 17 patients showed a marked alteration of intestinal permeability after ingestion of baker’s yeast bread. When fed the sourdough bread, the same 13 patients had values for excreted rhamnose and lactulose that did not differ significantly from the baseline values. The other 4 of the 17 CS patients did not respond to gluten after ingesting the baker’s yeast or sourdough bread. These results showed that a bread biotechnology that uses selected lactobacilli, nontoxic flours, and a long fermentation time is a novel tool for decreasing the level of gluten intolerance in humans [2].

Gluten breakdown by lactobacilli and pediococci strains isolated from sourdough.

Only 13 LAB (nine lactobacilli and four pediococci), among the 42 evaluated were able to utilize gluten as nitrogen source and to grow in GBM. Pediococcus pentosaceus CRL 797 showed a similar proteolytic activity to lactobacilli strains. In the majority of the cultures, basic amino acid group increased (c. 80% after 12 h incubation) mainly due to the release of ornithine, a flavour precursor of bread. Lysine, a limiting essential amino acid in wheat flour, increased by 150% in cultures of P. pentosaceus CRL 797… This study allows selecting P. pentosaceus CRL 797 and L. plantarum CRL 759 as potential starter culture for type III sourdough fermentation. It is shown for the first time that pediococci strains isolated from sourdough are proteolytically active on gluten [3].

Celiac disease (CD) is one of the most common food intolerance. The only effective treatment for CD is a strict adherence to a gluten-free diet throughout the patient’s lifetime. Gluten-free products are not widely available and are usually more expensive than their gluten-containing counterparts. There is, therefore, an urgent need to develop safe and effective therapeutic alternatives, to develop high-quality gluten-free products and to investigate the potential of the bread making biotechnology following ancient protocols which include long-time fermentation by selected sourdough lactic acid bacteria. This review describes the most relevant results related to biotechnologies that use selected sourdough lactic acid bacteria and probiotics as starters for sourdough fermentation to investigate their potential to decrease the risk of gluten contamination in gluten-free products. As shown by studies in vitro on celiac intestinal tissue and in vivo on CD patients, the bacterial proteolytic activity is rather promising not only as currently demonstrated for eliminating traces of contaminant gluten but probably also in perspective for the manufacture of tolerated baked goods [4].

Use of selected strains of Lactobacillus for removing gluten and enhancing the nutritional properties of gluten-free bread.

Forty-six strains of sourdough lactic acid bacteria were screened for proteolytic activity and acidification rate in gluten-free (GF) flours. The sourdough cultures consisted of Lactobacillus sanfranciscensis LS40 and LS41 and Lactobacillus plantarum CF1 and were selected and used for the manufacture of GF bread. Fermentation occurred in two steps: (i) long-time fermentation (16 h) and (ii) fast fermentation (1.5 h) using the previous fermented sourdough as inoculum (ca. 43%, wt/wt) with Saccharomyces cerevisiae (baker’s yeast). GF bread started with baker’s yeast alone was used as the control. Gluten was added to ingredients before fermentation to simulate contamination. Initial gluten concentration of 400 ppm was degraded to below 20 ppm only in the sourdough GF bread. Before baking, sourdough GF bread showed phytase activity ca. sixfold higher than that of GF bread started with baker’s yeast alone. Atomic absorption spectrophotometric analysis revealed that the higher phytase activity resulted in an increased availability of free Ca2+, Zn2+, and Mg2+. The concentration of free amino acids also was the highest in sourdough GF bread. This study highlighted the use of selected sourdough cultures to eliminate risks of contamination by gluten and to enhance the nutritional properties of GF bread [5].

This study was aimed at showing the safety, for young patients with celiac disease (CD), of sweet baked goods made of wheat flour, which was rendered gluten-free during sourdough fermentation. Selected lactobacilli and fungal proteases, routinely used in bakeries, degraded gluten to <10 ppm during sourdough fermentation. The resulting flour was mainly a mixture of water-/salt-soluble low-size peptides and free amino acids. Gliadin and glutenin fractions extracted from the pepsin-trypsin (PT) digest of the fermented wheat flour induced the expression of interferon (IFN)-γ at the level comparable with the negative control. After fermentation, the wheat flour was spray dried and used for making sweet baked goods. Eight patients with CD in remission were enrolled for the clinical challenge, and they daily consumed 200 g of sweet baked goods equivalent to 10 g of native gluten. One patient interrupted the trial after 15 days and another after 30 days only due to difficulties in the compliance of the daily consumption. All of the other patients showed normal values of hematology, serology, and intestinal permeability during 60 days of challenge. This study showed that a wheat flour-fermented product, having gluten completely degraded, is not toxic for patients with CD. Nevertheless, these foods should not be recommended for patients with celiac disease until a formal trial has been done [6].

Safety for patients with celiac disease of baked goods made of wheat flour hydrolyzed during food processing.

Fermentation of wheat flour with sourdough lactobacilli and fungal proteases decreases the concentration of gluten. We evaluated the safety of daily administration of baked goods made from this hydrolyzed form of wheat flour to patients with CD. Patients were randomly assigned to consumption of 200 g per day of natural flour baked goods (NFBG) (80,127 ppm gluten; n = 6), extensively hydrolyzed flour baked goods (S1BG) (2480 ppm residual gluten; n = 2), or fully hydrolyzed baked goods (S2BG) (8 ppm residual gluten; n = 5) for 60 days. Two of the 6 patients who consumed NFBG discontinued the challenge because of symptoms; all had increased levels of anti-tissue transglutaminase (tTG) antibodies and small bowel deterioration. The 2 patients who ate the S1BG goods had no clinical complaints but developed subtotal atrophy. The 5 patients who ate the S2BG had no clinical complaints; their levels of anti-tTG antibodies did not increase, and their Marsh grades of small intestinal mucosa did not change.A 60-day diet of baked goods made from hydrolyzed wheat flour, manufactured with sourdough lactobacilli and fungal proteases, was not toxic to patients with CD(Celiacs disease) [7].

The fermentation may enhance the recovery from intestinal inflammation of coeliac patients at the early stage of the gluten-free diet.

This study aimed at investigating the effect of corn, rice and amaranth gluten-free (GF) sourdoughs on the release of nitric oxide (NO) and synthesis of pro-inflammatory cytokines by duodenal mucosa biopsies of eight coeliac disease (CD) patients…..During manufacture of GF baked goods, the use of sourdough fermentation could be considered as an adjuvant to enhance the recovery from intestinal inflammation of coeliac patients at the early stage of the gluten-free diet [8].

Can You Handle Sourdough Even If You are Gluten Sensitive?

If you want to determine whether you are gluten sensitive but can handle sourdough, it is best that you reduce inflammation by removing foods that you are sensitive to first before you re-introduce sourdough. Buy The SelfHacked Lectin Avoidance Diet Cookbook now for a protocol on doing this.

This section contains sponsored links, which means that we may receive a small percentage of profit from your purchase, while the price remains the same to you. The proceeds from your purchase support our research and work. Thank you for your support.