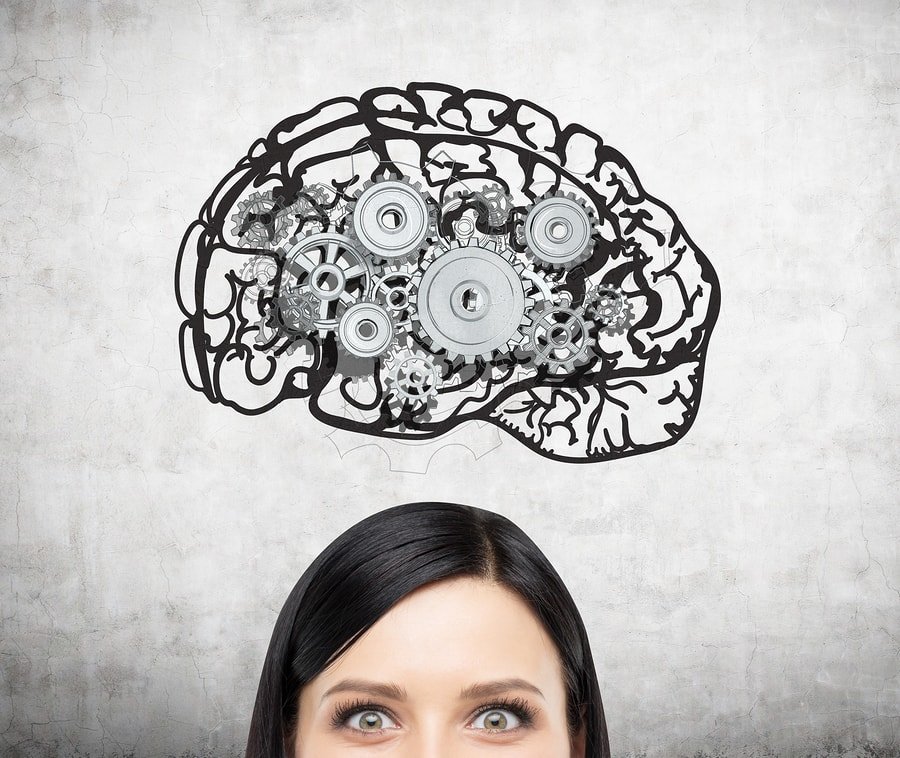 Centrophenoxine is sometimes touted as a “nootropic”, or “cognitive-enhancing” compound. Some people claim that it can protect the brain, enhance cognitive function, and even extend lifespan. But what does the science say about its effects, and how much do we actually know about its safety in human users? Read on to learn more about what the current research says about this drug’s potential effects, mechanisms, possible side-effects, and more!

Centrophenoxine, also known as Lucidril and Meclofenoxate, is one of the earliest and most studied nootropics, or so-called “smart” drugs.

Originally developed in 1959, this drug has been studied for its potential to help age-related brain disorders, such as Alzheimer’s and dementia. It is also used by healthy people to enhance memory and cognitive function and improve overall brain health [1, 2, 3, 4, 5, 6].

Centrophenoxine is a combination of two chemicals:

Once it is absorbed in the body, a portion of centrophenoxine breaks down into DMAE and pCPA in the liver. DMAE is then converted to choline, while the remaining centrophenoxine circulates throughout the body [2, 9].

Although its precise mechanisms are still being actively studied, some early research has suggested a variety of potential mechanisms that may be responsible for some of centrophenoxine’s effects.

Some of these proposed mechanisms include:

While a number of centrophenoxine’s potential effects have been studied, much of this research is still in a relatively early stage, and in most cases it is difficult to come to any firm conclusions about its relative efficacy and safety in healthy human users.

This is a common situation for many so-called “nootropic” supplements and compounds, as these tend not to receive as much scientific attention as other drugs, such as pharmaceutical medications that are used by doctors to treat specific medical conditions. As a result, even supplements and compounds that are relatively “well-studied” often still don’t have the amount of research needed to officially classify them as effective, or get FDA approval for specific uses.

Therefore, the potential effects listed below are still considered to have “insufficient evidence”, and should be taken with a grain of salt until further research work – including large-scale clinical trials in healthy human users – is performed.

1) May Affect Learning and Memory

As a so-called “nootropic”, or “cognitive-enhancing” compound, centrophenoxine has been claimed to be able to boost certain cognitive functions – such as learning and memory – in its users. But what does the actual science have to say about this?

Although some studies have reported centrophenoxine to be beneficial in certain populations of older individuals, there are no solid scientific studies to back up its use as a nootropic in young adults.

For example, centrophenoxine was reported to help promote the formation of long-term memories and increased alertness, according to one study in 60 healthy – but elderly – human subjects [17].

Similarly, centrophenoxine was also reported to improve memory in 50 elderly patients with dementia [1].

On the animal research side, one study mice reported that centrophenoxine improved learning and memory in aged mice [4].

However, both of the early human studies described above – while promising – were limited to older users, or those with specific age-related medical conditions. Therefore, these preliminary results can’t yet be taken as solid proof of nootropic effects in younger, healthy human users without much more additional research in appropriately representative human populations.

The following potential uses of centrophenoxine are based solely on animal- and cell-based studies, and lack any appropriate human trials so far. Therefore, these are only potential “launching-points” for future clinical studies in humans, and no solid conclusions can be made about these effects in human users until additional research is done.

One of the more widespread claims about centrophenoxine is that it may potentially help protect the brain and its cells from stress and damage – in other words, that it may be “neuro-protective.”

A few lines of research in animals have reported early findings that offer some preliminary support for this effect, although appropriate human trials are so far lacking.

For example, several animal studies have reported that centrophenoxine may protect nerve cells from oxidative damage due to toxin exposure or stroke. In rats with various types of brain injury, centrophenoxine was reported to reduce the damage caused by free-radicals, and may have prevented some cognitive deficits that sometimes result from elevated oxidative stress, such as impairments to memory, overall cognitive function, and movement/motor control [8, 18, 19, 14].

Similarly, according to some other animal studies (in rats), centrophenoxine reportedly increases the activity of major antioxidant enzymes like glutathione and superoxide dismutase (SOD) in the brain, which may partially account for some of its purported beneficial effects [3, 12].

Additionally, other studies have reported that it may increase energy use in the brain’s cells, such as by stimulating glucose uptake and oxygen consumption, which are each essential factors when it comes to how the brain uses and produces cellular energy [13, 20, 3, 21].

Nonetheless, all of the above findings have been reported in animal or cell studies only, and extensive additional research in humans will be necessary to know whether these effects translate over to healthy human users of centrophenoxine as well.

Our e-book, How To Solve Procrastination, Forgetfulness and Lack of Mental Clarity Using Your Genes has helped hundreds of people get rid of their brain fog and improve their cognitive function. Learn which genes are key players in cognitive function and what you can do to optimize them.

Another relatively common claim made about centrophenoxine is that it may have mood-boosting effects.

Unfortunately, no human research has been done on potential mood effects from centrophenoxine, specifically. However, according to one early study of 80 healthy subjects, taking a different drug containing DMAE for three months was reported to increase their perceived energy levels and overall sense of well-being [22]. This offers suggestive evidence that centrophenoxine could theoretically improve mood through its active DMAE component – however, this preliminary finding would have to be backed up by studies specifically using centrophenoxine in order to properly confirm this effect.

Additionally, one animal study reported that centrophenoxine significantly reduced anxiety in rats exposed to stress [23]. However, follow-up studies in humans would be needed to make sure the effect translates to human users as well.

Centrophenoxine has also been touted as having potential effects on overall lifespan – but how good is the actual evidence behind this?

So far, these effects have only been looked at by animal studies.

According to one animal study, centrophenoxine was reported to extend the lifespan of mice by 30 to 40% [24].

Centrophenoxine has also been reported to potentially reverse the effects of aging in the brain – specifically, by reducing free radicals and lipofuscin buildup in the rat brain (hippocampus), both of which are linked to neurodegenerative disease [11].

However, the mechanisms of aging may be very different between mice and humans, and so all of these early findings would have to be followed up on by clinical trials in humans in order to properly verify these potential effects.

Like any drug, centrophenoxine has the potential to cause adverse side-effects, some of which could be potentially quite serious.

Importantly, because this compound is relatively new, there is not much evidence about how safe it is for human users, or how frequently it might lead to negative side-effects.

For this reason, we would strongly advise against experimenting with this compound until more data about its safety is available.

If you do make the personal decision to experiment with it, make sure to discuss it with your doctor first! Also make sure that he- or she is fully up-to-date about any other medications or drugs you may be taking, any pre-existing health conditions, or other lifestyle and dietary factors that could potentially impact your health. Only your doctor has the appropriate medical expertise to help you properly manage the potential side-effects, adverse drug interactions, and other potentially negative outcomes from using nootropic compounds.

Although only a small amount of research on centrophenoxine’s safety in humans has been done so far, the early work that does exists suggests that it is generally safe – or at least not obviously toxic [1, 25, 26].

However, centrophenoxine can raise acetylcholine levels. An excess of acetylcholine could cause mild side effects like nausea, headache, gut issues, and sleeplessness [27].

People with major depression, bipolar disorder, seizure disorders, or Parkinson’s disease should probably avoid this drug, as too much acetylcholine can worsen these conditions, according to many scientific and clinical reports [28, 29, 30, 31, 32].

Also, pregnant women should avoid it because its DMAE component may cause birth defects [33].

Note: The information in this section contains information about the dosages commonly used by some of the early studies that have been done on centrophenoxine so far. The information below is not intended as a guide for personal use of centrophenoxine, as adequate data about its potency, safety, or overall effects in healthy human populations is not currently available.

This drug comes in powdered form and capsules. Doses used in clinical trials are typically 600 to 2000 mg/day, taken in two divided doses at breakfast and lunch [1, 17, 25].

Some users report combining centrophenoxine with racetams, although no hard data on the safety of this is available.

However, according to one preliminary animal study, combining choline with piracetam enhanced memory in old rats. Since centrophenoxine is a good source of choline, this finding could suggest that chole may enhance the effectiveness of other racetams in improving learning and memory [34, 35]. However, there are no human studies that support this combination.

Because the main component in centrophenoxine – DMAE – is believed to act (at least in part) by increasing acetylcholine levels [8, 10], it may have unpredictable interactions with other drugs that affect this neurotransmitter and other choline-related mechanisms, such as:

Although specific studies on centrophenoxine’s potential interactions with these substances are currently lacking, the potential for interactions means that caution is advised when using centrophenoxine alongside any other medications, supplements, or drugs that fall into one of the above categories.

Having a hard time focusing?

If you’re interested in natural and targeted ways of improving your foggy brain, we recommend checking out SelfDecode’s Brain Fog DNA Report. It gives you genetic-based diet, lifestyle, and supplement tips that can help improve you clear the haze. The recommendations are personalized based on YOUR DNA.