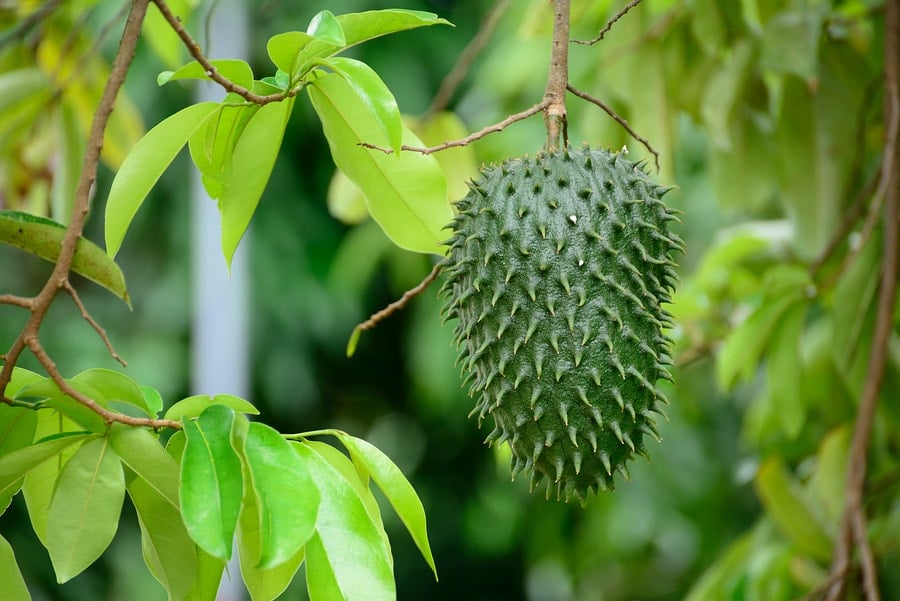 Guanabana is a tropical fruit tree with creamy pulp. People traditionally used all parts of the tree for pain, inflammation, malaria, diabetes, and parasites. The anti-cancer properties of its leaves have been studied in the lab, but human studies are lacking. Read on to learn if any of guanabana’s purported benefits have scientific ground and why taking this plant can be a dangerous idea.

Guanabana (Annona muricata), also known as soursop or graviola, is a fruit tree native to tropical areas of Central and South America and the Caribbean. It is part of the custard apple family (Annonaceae) and is now widely cultivated in tropical and subtropical areas worldwide, including Africa and Southeast Asia [1, 2].

Guanabana is most known for its creamy, tangy fruit pulp. But, traditional practices have used all portions of the guanabana plant for conditions such as fever and malaria. Evidence is lacking to back up them up [1].

More than 200 phytochemicals in guanabana have been identified and studied in cells or animals, but human data are lacking [1].

Guanabana supplements have not been approved by the FDA for medical use. Supplements generally lack solid clinical research. Regulations set manufacturing standards for them but don’t guarantee that they’re safe or effective. Speak with your doctor before supplementing.

Guanabana is a tropical fruit best known for its creamy pulp. All parts of the plant were used traditionally, but human studies are lacking to support its claimed benefits.

The guanabana seed and leaf contain large amounts of vitamins C and E, responsible in part for its antioxidant effects [6].

The most notable compounds in guanabana are considered to be alkaloids, phenols, and acetogenins [1].

The primary active phytochemicals in the leaf, seed, stem, and pulp of the guanabana are acetogenins. Scientists are researching these chemicals in cells and animals [7, 8, 9, 10, 11].

This section covers hypotheses about the possible mechanism of action of compounds in guanabana. These mechanisms remain unproven as human data are lacking.

Scientists posit that the extracts of guanabana leaves might exert their antioxidant activity by scavenging free radicals. In theory, reducing free radicals helps prevent damage to cells, proteins, and DNA [17, 18].

The effects of guanabana extracts are being investigated in cells. Possible pathways under investigation include:

Remember, however, that most substances (natural or synthetic) that are researched in cells fail to pass further animal studies or clinical trials due to a lack of safety or efficacy.

According to experimental theories, guanabana might act on inflammatory, metabolic, and antioxidant pathways.

The following purported benefit is only supported by limited, low-quality clinical studies.

There is insufficient evidence to support the use of guanabana in women with HPV infection.

Remember to speak with a doctor before taking guanabana supplements, which should never be used as a replacement for approved medical therapies.

In one study of 60 women with HPV and slightly abnormal PAP test results (low-grade squamous intraepithelial lesions), a combination of guanabana and ellagic acid by mouth increased the clearance of high-risk HPV by 3-fold after 2 months, when compared with placebo [24].

The supplement also reduced the progression of slightly abnormal cervical changes to more severe ones (high-grade squamous intraepithelial lesions)  by about 12%, compared with placebo [24].

Additional trials are needed to verify the effects of guanabana and ellagic acid on HPV outcomes in women.

No clinical evidence supports the use of guanabana for any of the conditions listed in this section.

Antioxidants derived from plants are claimed to have protective effects against free radicals.

However, evidence is lacking to support this alleged benefit. Researchers are investigating antioxidants in guanabana leaves, fruit, and peel against oxidative damage in cells. According to one unproven hypothesis, these compounds might scavenge free radicals and reduce reactive oxygen species [17, 25, 26, 27, 28, 29].

Guanabana flower extracts are being researched as a food oil preservative to prevent spoiling [30].

Guanabana contains several antioxidants, but the effects of its active compounds on human health is unknown.

Scientists are investigating the effects of guanabana peel, leaf, and seed extracts against various microorganisms including parasites, viruses, gram-positive, and gram-negative bacterial strains.

Guanabana is being researched against the following types of infections in cells or animals:

We can’t draw any conclusions from these studies. Human data are lacking.

Evidence is lacking to support the use of guanabana for mosquito-transmitted diseases.

Extracts from guanabana leaf and seed were toxic to larvae of 3 species of mosquitoes that are common carriers of tropical diseases like malaria and dengue fever [50, 51, 52, 53].

Scientists hypothesize that isolated acetogenins from guanabana might be toxic to mosquito larvae by inhibiting mitochondrial electron transport, which halts energy production in the cells of the larvae [54].

However, the antimalarial effects of guanabana in humans are completely unknown.

Guanabana seems to help fight malaria in animals and cells, but human studies are needed to test this effect.

Evidence is lacking to support the use of guanabana for inflammation in humans.

The pulp and skin of the guanabana reduced inflammation in mice by reducing chemical mediators of inflammation (COX and nitric oxide) [55].

Researchers are looking into the effects of guanabana leaf extracts and tea on inflammation in mouse cells [12, 56, 57].

No human evidence supports the use of guanabana for diabetes.

Other research teams are investigating whether phenols in guanabana extracts (fruit, skin, and leaf) and guanabana tea can suppress enzymes relevant to type 2 diabetes (α–amylase and α-glucosidase) [60, 61, 62].

Evidence is lacking to support the use of guanabana as an insect repellant in humans.

Extract of the guanabana leaves killed snail adults and egg masses, meaning it might have some pesticide-like properties [63, 64, 65].

Acetogenins from guanabana were toxic to agricultural pests including the potato beetle, green peach aphid, and African cotton leafworm [66].

Stem bark from guanabana was protective for the liver and increased bile flow in male rats with liver damage [69, 70].

Evidence is lacking to support the use of guanabana for anxiety, depression, or high stress levels in humans.

Guanabana leaf extracts had sedative and antidepressant-like effects in rats by decreasing anxiety-related behavior such as environment exploration and increased mobility, respectively [73].

No human trials have investigated the effects of guanabana on mental health in humans.

Guanabana has not been shown to treat or prevent cancer.

It showed some anti-cancer effects in lab studies, but human data are lacking.

Other phytochemicals in guanabana extracts are also under investigation [21].

However, many substances have anti-cancer effects in cells, including downright toxic chemicals like bleach. Phytochemicals from guanabana damaged nerve cells in dishes and animals. According to some animal studies, long-term use may increase the risk of neurological diseases.

Overall, guanabana is being researched on the following types of cancer cells in dishes and/or experimental animals:

Extracts of the stem and bark of guanabana increased wound healing in rats [106].

Ulcer lesions were reduced in rats pre-treated with guanabana leaf extracts. Scientists suspect the extract’s antioxidant content reduced oxidative damage and protected the stomach wall, though this remains to be determined in clinical trials [109, 110].

Scientists are investigating the effects of guanabana leaf extracts on immune activity in macrophage cells and its involvement in the mitogen-activated protein kinase pathway. They are also researching the extracts in human liver and red blood cells exposed to arsenic [111, 112].

The effects of this fruit on pain in humans is unknown. Guanabana fruit extract reduced chemical and thermal pain in mice, likely by interacting with the opioid pathway [55].

Scientists are exploring whether guanabana can reduce ulcer damage or enhance immune function.

The effects of guanabana on fertility and allergies in humans are completely unknown.

Guanabana’s acetogenins can be toxic to nerve cells and cross the blood-brain barrier [115].

Studies on populations in the West Indies suggest a potential relationship between high consumption rates of guanabana fruit and tea, and a higher incidence of movement disorders like atypical parkinsonism [116, 117, 118].

After 12 months, guanabana juice consumption in mice increased the production of reactive nitrogen species, molecules that can damage cells [119].

Guanabana juice and leaf extracts may intensify the effects of the venomous pit viper snake [121].

Guanabana fruit can be dangerous to consume regularly or in large amounts. It may cause movement disorders that resemble Parkinson’s disease.

Guanabana fruit is typically eaten raw and ripened and can be incorporated into drinks, smoothies, and desserts. The fruit may also be jarred as a puree or as a juice.

Seeds should be avoided due to their toxic nature. Guanabana can also be roasted or fried like a vegetable.

Guanabana tea made from the leaves is readily available from suppliers but caution is advised due to potential neurotoxicity [116, 117, 118].

Guanabana supplements are available through suppliers but have not been evaluated for potency, effectiveness, or toxicity in humans.

Guanabana seeds and leaves can contain dangerous toxins. The safety of commercially available supplements is unknown.

Recommended dosing of guanabana fruit, leaves, stems, or bark has not been established due to the lack of human trials and because guanabana is not approved by the FDA for any condition.

Caution is advised since all parts of the plant can be toxic.

A woman going through menopause found guanabana supplements to be highly effective in regulating mood, stress, hormones, and blood pressure.

Guanabana is a tropical fruit that people have long used traditionally. Its creamy pulp is often blended into drinks or made into a nectar. The pulp contains vitamin C and some minerals.

Unfortunately, only one human study on guanabana has been published so far. In this study, guanabana combined with ellagic acid appeared to improve HPV infection outcomes in women. More research is needed to verify this effect and the safety of supplementation.

Also, eating guanabana regularly or in large amounts can be dangerous and cause Parkison’s-like symptoms. The seeds and leaves are also poisonous. Extreme caution is advised.