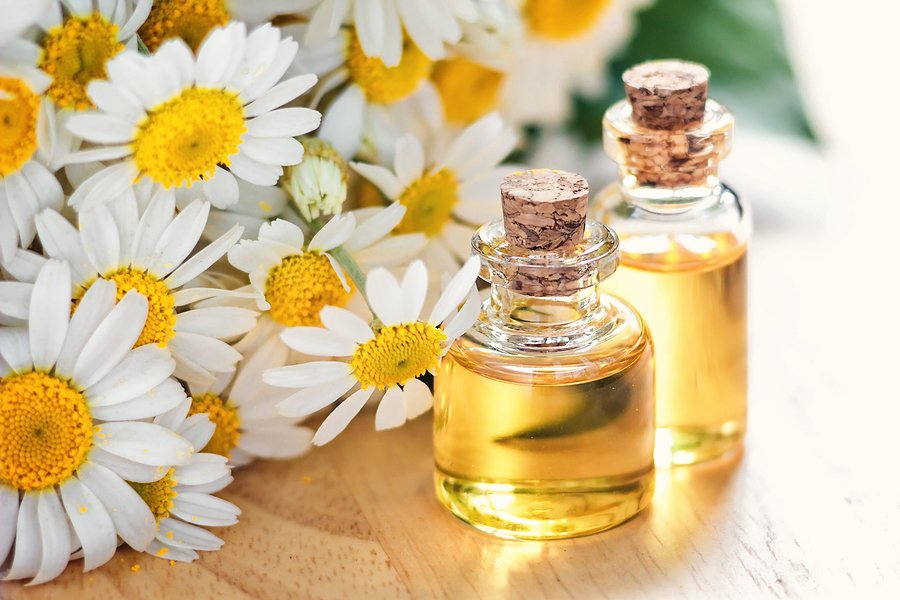 Many different preparations of chamomile have been developed, but the most popular form is the herbal tea. In fact, more than one million cups of chamomile tea are consumed per day around the world. Read on to discover the potential health benefits of chamomile.

This extraordinary herb is commonly used to help with many ailments such as hay fever, insomnia, and inflammation. Because of its medicinal value, chamomile is often referred to as the star among medicinal species [2].

Chamomile possesses many healing properties because it contains different compounds such as terpenoids and flavonoids, natural compounds with pharmacological effects [1, 3]:

Chamomile is considered very safe, but supplements have not been approved by the FDA for medical use and generally lack solid clinical research. Regulations set manufacturing standards for them but don’t guarantee that they’re safe or effective. Speak with your doctor before supplementing.

In two studies of a total of 334 people with diarrhea, a blend of chamomile and apple pectin reduced the severity and duration of symptoms compared to the placebo [9, 10].

A study on 149 patients showed that chamomile, in combination with other herbs, reduced heartburn in patients with digestive disorders [11].

However, because the treatment was a combination that included other herbs, the effectiveness of chamomile alone was not measured [11].

Chamomile can be used as a treatment for patients with generalized anxiety disorder by reducing depression, restlessness, and constant worrying.

The following purported benefits are only supported by limited, low-quality clinical studies. There is insufficient evidence to support the use of chamomile for any of the below-listed uses. While chamomile is considered very safe, it should never be used to replace anything your doctor recommends or prescribes.

Mucositis is the painful inflammation and ulceration of the mucous membranes lining the gut. A study involving 98 patients concluded that a mouth rinse of chamomile reduced symptoms of mucositis and prevented the occurrence of severe mucositis in patients [14].

In a study of 72 patients, chamomile-treated wounds or cuts caused by surgery healed faster compared to those treated with hydrocortisone cream [15].

Chamomile extract increased the rate of wound contraction and skin-cell formation in rats by increasing hydroxyproline (a peptide found in the skin that is responsible for healing) [18].

Another study involving 80 elderly people over 60 yielded similar results. After 4 weeks of oral consumption of chamomile extract, the participants improved their sleep quality [20].

However, in another study of 34 people with insomnia, chamomile did not improve sleep duration or quality [21].

A study on rats showed that chamomile extract decreased blood sugar by reducing glucose absorption in the intestine [23].

Due to excess blood sugar, individuals who suffer from diabetes have delayed wound healing and susceptibility to infections [24, 25].

A study on diabetic rats concluded that chamomile extract can improve the healing of oral ulcers by slowing down the rate of cell death (apoptosis) in the lining of vessels [26].

Perineal pain is the most common complaint of mothers after surgical cuts to aid childbirth. A triple-blind study of 114 women showed that chamomile cream can reduce this pain in women who have given birth for the first time [27].

Xerostomia, also known as dry mouth syndrome, is caused by a decrease in the amount of saliva.

In a study of 74 participants with xerostomia, a saliva substitute made from chamomile and linseed was effective in relieving symptoms in older participants. Participants who took chamomile experienced relief in the mouth and had better ease in swallowing food [29].

No clinical evidence supports the use of chamomile for any of the conditions listed in this section. Below is a summary of the existing animal and cell-based research, which should guide further investigational efforts. However, the studies listed below should not be interpreted as supportive of any health benefit.

A study in rats concluded that chamomile contains three terpenoids (α-bisabolol, bisabolol oxide A, and guaiazulene) that reduce inflammation by inhibiting COX [34].

NO is produced by white blood cells in response to a threat or disease, and in high amounts can be toxic and leads to inflammation. Studies show that chamomile is an effective anti-inflammatory agent by decreasing NO production [35].

Eczema, medically known as atopic dermatitis, is an itchy inflammation of the skin.

A study on rats concluded that German chamomile oil alleviates skin inflammation after application to the skin for 4 weeks [37].

Anisakiasis is a parasitic disease caused by the presence of worms from the Anisakis genus in the gut. This disease is usually contracted through the consumption of raw or undercooked fish. Symptoms of anisakiasis include vomiting, nausea, stomach pain, and diarrhea.

An animal study concluded that chamomile essential oil can treat anisakiasis by producing damage to the parasites’ muscular and digestive systems, and ultimately killing them [39].

Antioxidant compounds in chamomile are being investigated for potential anti-cancer effects. Chamomile extract prevents and slows the progression of human breast and gut cancer cells [40, 41, 42, 43, 44].

Studies have shown that chamomile has low toxic effects as well as minimal growth inhibition in normal cells [40, 41].

However, cell studies may have no bearing whatsoever on animal or human studies. Often, compounds that kill cancer cells in a dish either have no effect or are harmful in the next phase of research. Future studies will clarify whether chamomile has any real promise against cancer.

One of the most famous ways to use chamomile is to make a cup of chamomile tea. The most common recipe is 1 tablespoon of dried chamomile flowers per 8 ounces of hot water. Apart from serving as a drink, the tea can also be used as a mouthwash or gargle.

Chamomile tincture or extract can be prepared by mixing 1 part chamomile flower with 4 parts of water and 12% consumable alcohol. Extracts are usually stronger than tinctures.

Chamomile can also be applied to the skin in the form of a cream or ointment to reduce swelling and pain.

Chamomile oil is used in aromatherapy. Inhalation of the vaporized oil is recommended to relieve anxiety and general depression.

Chamomile may interact with drugs such as warfarin, a common anticoagulant (anti-blood clotting). Warfarin is broken down by two proteins (CYP1A2 and CYP2C9), which are inhibited by chamomile. In a case study, a patient taking warfarin along with chamomile experienced increased internal bleeding [46, 47].

To avoid any adverse effects or unexpected interactions, talk to your doctor about whether any of your prescription medications could interact with chamomile.

What is Fenugreek? (Methi Seeds, Leaves, Tea) + Side Effects