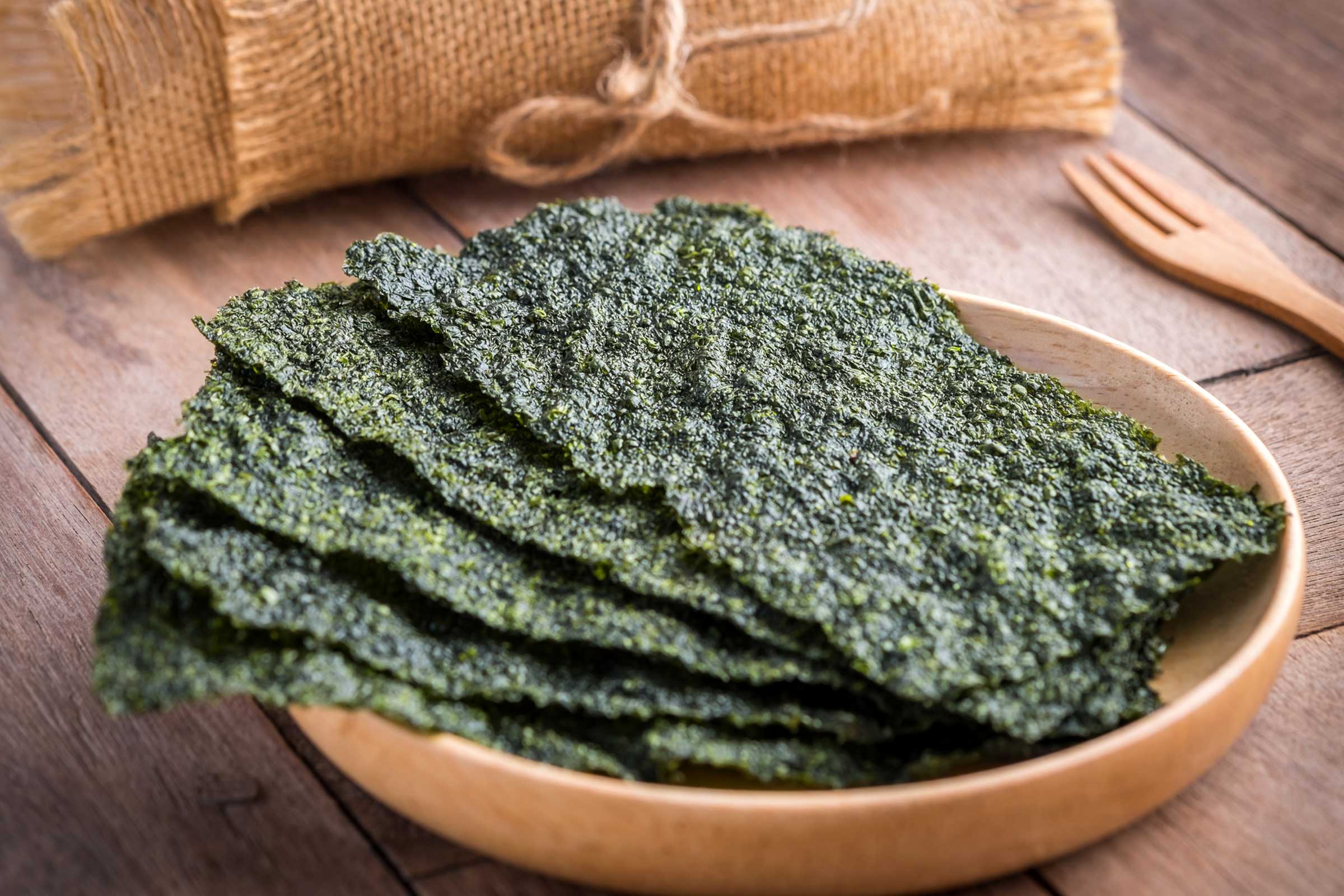 Fucoidan is a type of polysaccharide found in seaweeds that has been researched for its anticancer effects. Preliminary research suggests it may benefit those with osteoarthritis, viral infections, and cancer patients undergoing chemotherapy treatment. Read on to see the potential benefits and mechanisms of fucoidan.

Fucoidan is a complex sulfated polysaccharide derived from rich sources such as bladderwrack, other brown algae, echinoderms, and seagrasses [1].

Research in marine food sources has helped reveal many potential remedies for an array of health issues – most being attributable to the presence of fucoidan. However, none of them has been sufficiently investigated.

Fucoidan decreases NF-kappaB binding activity, p65 nuclear movement of proteins from the cellular fluid to the nucleus, and IκB-α degradation, which prevents inflammation [8].

Fucoidan stimulates an increase in natural killer (NK) cells and a decrease of transcription factor AP-I, which is involved in cellular growth and division. Fucoidan also kills T-cell leukemia virus type I (HTLV-1) by inactivating NF-kB, a regulator of antiapoptotic proteins [9, 10].

Fucoidan activates caspases 8 and 9, which are enzymes involved in programmed cell death [11].

Benefits of Fucoidan and Fucoidan-Rich Foods

The disease control rate (DCR) is the percentage of patients who have achieved a complete response, a partial response, and stable disease from a therapy. In a clinical trial on 54 patients with colorectal cancer, 4,000 mg fucoidan powder in addition to chemotherapy resulted in a DCR of 92%, compared to 69% in the placebo group [12].

In mice with colon tumors, treatment with fucoidan extract reduced tumor growth and increased the production of immune cells in the spleen [13].

In mice given chemotherapy, fucoidan prevented gut inflammation and increased the length of villi in the gut [14].

The main anticancer mechanisms of fucoidan are immune cell activation and increased the production of anticancer cytokines [22, 23].

Although this is the best known among the claimed benefits of fucoidan, the existing evidence is clearly insufficient to support its use. Most of the research has been done in cells and only one small clinical trial has been carried out. You may discuss with your doctor if it may help as an adjuvant therapy. Importantly, never use fucoidan (or any other supplements) as a substitute for proven anticancer therapies.

However, 255 mg fucoidan from bladderwrack was as effective as the placebo in another trial of 122 people with OA of the knee and hip [25].

In a cell-based study, fucoidan reduced the viability, survival, and invasiveness of the cells that trigger rheumatoid arthritis (fibroblast synoviocytes), by reducing the activation of the NF-κB and p38 inflammatory pathways [8].

Again, this is a typical fucoidan use insufficiently supported by scientific research. Only 2 clinical trials (with mixed results) exist. Further clinical research is needed to shed some light on this claimed benefit.

In a small trial on 13 people with a tropical viral disease that causes weakness, muscle spasms, and sensory disturbances (tropical spastic paraparesis), 6 g fucoidan daily for 6-13 months decreased the blood levels of the virus that causes the disease (HTLV-1) by 42% [26].

In another trial on 70 elderly people, supplementation with fucoidan increased the immune response to seasonal influenza vaccination. The supplement increased antibody production after the vaccination, possibly helping prevent the flu [27].

Evidence for the effect of fucoidans against viruses in animals and cells include:

The evidence is promising but insufficient to support the use of fucoidan against viral infections. Larger, more robust clinical trials are needed to confirm these preliminary results.

In a pilot study of 20 volunteers, 2,250 mg fucoidan for 12 days moderately decreased clotting ability by interfering with the final stage of the coagulation process [35].

In another trial on 33 healthy volunteers, seaweed capsules with 400 mg fucoidan prevented blood clotting. Fucoidan increased the production of hydrogen peroxide, which acted as a messenger molecule to produce the anti-blood clotting protein PGI2 [36].

In a cell study, fucoidan increased the activity of proteins that block the coagulation process [37].

No clinical evidence supports the use of fucoidan for any of the conditions listed in this section. Below is a summary of the existing animal and cell-based research, which should guide further investigational efforts. However, the studies should not be interpreted as supportive of any health benefit.

Fucoidan delayed the onset of disease in mice infected with scrapie, which leads to mitochondrial dysfunction in the brain [38, 39].

In a rat brain model, fucoidan prevented the death of brain cells caused by β-amyloid plaques, which are involved in Alzheimer’s disease [41].

Fucoidan prevented the overactivation of microglia that may lead to neurodegeneration in brain cells [42].

Fucoidan provided protection from radiation in cells and in mice [43].

In rats given aspirin to cause ulcers, fucoidan prevented the ulcers from developing [44].

Fucoidan inhibited Helicobacter infections in the stomach by preventing the bacteria from sticking to gut lining cells [45].

Bladderwrack’s fucoidan helped to protect against chemically-induced excess scarring of the liver in rats [46, 47].

Kidney stones can be caused by high levels of oxalate. In rats with excessive oxalate in their urine, fucoidan normalized its levels. Fucoidans also improved their antioxidant status and reduced the risk of developing stones [50].

Mice exposed to a high-fat diet gained less weight when fucoidan was included in their diet [51].

Fucoidan increased the activity of the enzyme that breaks down fat (lipase) in fat cells. Fucoidan also blocked glucose uptake into these cells [52].

Keep in mind that the safety profile of fucoidan is relatively unknown, given the lack of well-designed clinical studies. The list of side effects below is not a definite one and you should consult your doctor about other potential side effects based on your health condition and possible drug or supplement interactions.

Based on the limited clinical research conducted so far, fucoidan appears to be very well-tolerated, with no reported side effects.

Carotenodermia, oranging/yellowing of the skin, may arise from excessive dietary intake of seaweeds [53].

Most of the studies on fucoidan were in animals or isolated cells and there is a lack of clinical trials to support the existing research. Further clinical trials are needed to confirm if fucoidan benefits humans.

Supplement/Herb/Nutrient-drug interactions can be dangerous and, in rare cases, even life-threatening. Always consult your doctor before supplementing and let them know about all drugs and supplements you are using or considering.

Because fucoidan may be an anticoagulant (clot preventative), caution should be taken when using it with other anticoagulants such as warfarin or heparin [37, 35].

Dosages For Fucoidan and Fucoidan-Rich Supplements

Because fucoidan is not approved by the FDA for any conditions, there is no official dose. Users and supplement manufacturers have established unofficial doses based on trial and error. Discuss with your doctor if fucoidan may be useful in your case and which dose you should take.

The opinions expressed in this section are solely those of fucoidan users, who may or may not have medical or scientific training. Their reviews do not represent the opinions of SelfHacked. SelfHacked does not endorse any specific product, service, or treatment.

Most reviews were from people using fucoidan as an add-on to their anticancer therapy. Some of them were satisfied and reported feeling less fatigued after taking it. However, a user who bought the supplement for lung cancer reported no benefits.