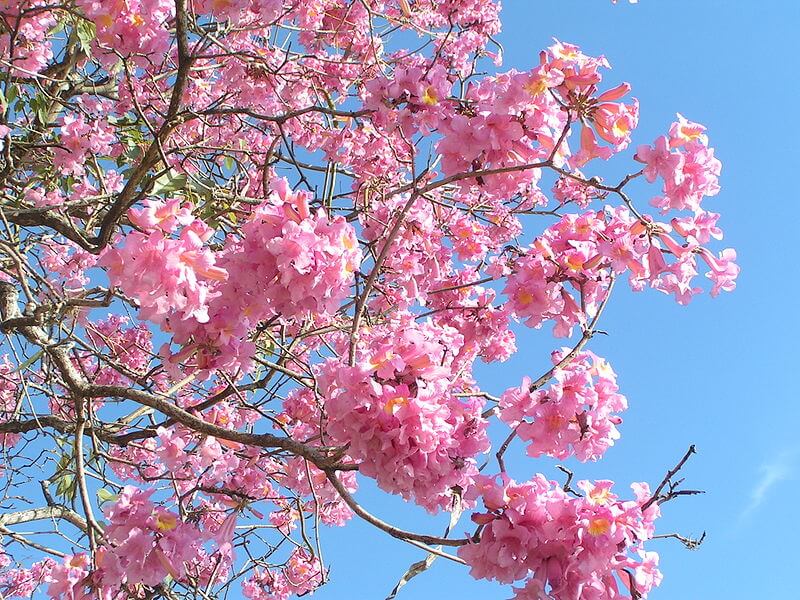 The Pau D’arco tree is indigenous to the Amazonian rainforest and has a long history of traditional use for infections, stomach, and bladder problems. Its active ingredient, beta-lapachone, also attracted a lot of attention for its cancer-fighting, anti-inflammatory, and anti-aging potential. Read on to learn about all the health benefits of Pau D’arco and the research behind them.

What Is Pau D’arco?

The Pau D’arco tree (Tabebuia avellanedae) is a large evergreen tree with purple flowers, native to the Amazonian rainforest and South America. Traditional healers make tea from the inner bark of the tree, which is known as Taheebo or Lapacho. The tea can be consumed as a drink, or used on the skin. Pau D’arco use probably predates the Incas [1+].

Pau D’arco received a lot of medical and scientific attention in the 60s. The Brazilian press published sensational stories about it, and claims about a “miraculous cancer cure” started to spread. This attracted researchers from all over to world to investigate what was so special about this Amazonian tree and its extracts. It even attracted the attention of the United States National Cancer Institute.

Scientists then discovered that Pau D’arco has two main cancer-fighting and active compounds – lapachol and beta-lapachone – named after the traditional preparation [1+].

The bark extract contains many other active compounds that are now being explored for their antibacterial properties [2].

The studies, however, were only done on animals or cells. And while there are various anecdotal reports about its benefits in humans, no clinical studies have been carried out.

As the main and most well-researched cancer-fighting component, beta-lapachone can affect numerous biological pathways to combat cancer. So far, we know that beta-lapachone may:

Pau D’arco has only been tested in animal and cell-based studies, which means that no clinical evidence supports its use for any conditions. Below is a summary of the existing research, which should guide further investigational efforts. However, the studies listed should not be interpreted as supportive of any health benefit.

This cancer-fighting potential is what attracted researchers to Pau D’arco in the first place. However, it’s still in the animal and cell stage and clinical trials have yet to determine if it may be useful in anticancer therapy.

Do not under any circumstances attempt to replace conventional cancer therapies with Pau D’arco, its active compounds, or any other supplements. If you want to use it as a supportive measure, talk to your doctor to avoid any unexpected interactions.

Beta-lapachone revealed to be active against various cancers in cellular studies, such as against human breast, prostate, and leukemia cancer cells [1+].

The water extract, Taheebo, could kill breast cancer cells by blocking estrogen receptors and activating cancer-fighting and detox genes (such as bcl-2 and CYP1A1) [7].

Beta-lapachone could also increase the cancer-killing effects of radiation therapy in mice with head and neck cancers and prolong their survival. It decreased the activity of an important cancer gene (NQO1), which is more active in cancer cells than in normal cells. This makes beta-lapachone naturally cancer-specific and opens the possibility to target various cancers [10, 11].

Treatment of human cancer cells with beta-lapachone sensitized an anti-cancer pathway in cells (Prx1). This may make cancer cells vulnerable to oxidative stress, which can trigger their death. Beta-lapachone could potentially enhance the effects of conventional cancer treatments [12].

Beta-lapachone, however, has one major downside: it‘s not absorbed well from the gut and is active only for a short time. To overcome this, scientists came up with stable nanoparticles that contain both beta-lapachone and another cancer drug (paclitaxel). According to them, these particles could kill lung and pancreatic cancer and would be absorbed better [13].

Some cancer cells, like colon cancer, can also break down beta-lapachone (via phase II enzymes), rendering it inactive. Although cancer cells have less of these detox enzymes than normal cells, this may still explain why beta-lapachone might not be able to fight some cancers [14].

Joe Cohen is well-known for his work as a successful entrepreneur in the health field after he overcame his many health issues using a personalized regimen. Find out exactly which supplements he takes and what lifestyle changes Joe has made to maintain optimal health and prepare his body to fight off infections.

Postmenopausal overweight mice given Taheebo extract lost weight and body fat. Taheebo also reduced triglycerides in fat cells. It seemed to prevent fat accumulation and weight gain, even though the mice were deprived of the protective effects of estrogen [15].

There are various anecdotal reports of Pau D’arco being used as an anti-inflammatory and painkiller, especially for osteoarthritis and rheumatoid arthritis.

Taheebo extracts reduced both pain and overall inflammation by 30 – 50% in mice [17].

The extract could safely improve osteoarthritis in mice and lower inflammatory substances. In immune cells, it was able to reduce the chief driver of inflammation in the body, NF-kB [18].

Taheebo also reduced other inflammatory substances (like prostaglandin PGE2) in mice by blocking the main enzyme that contributes to inflammation (COX-2) in immune cells. In fact, this is the same pathway that common OTC anti-inflammatory painkillers (NSAIDs) target [19, 20].

Beta-lapachone reduced inflammation and protected brain cells. It acted as an oxidant to neutralize reactive oxygen species and blocked inflammation on a DNA level. It could also increase protective, anti-inflammatory cytokines like IL-10 [21].

As an added benefit to its anti-inflammatory effects, Pau D’arco may also reduce allergies.

The extract reduced symptoms of eczema in mice and protected their skin without any toxic effects. It reduced substances involved in inflammation and allergies, such as:

This points to its potential for balancing both the Th1 and Th2 response, although it seems to affect Th2-allergic symptoms more [22].

Beta-lapachone improved symptoms in mice with Huntington’s disease. It could activate genes that help reverse many chronic diseases (SIRT1). It also protected the body’s energy powerhouse – mitochondria, which could support brain function even in healthy mice [23]

This is perhaps the most common traditional indication for Pau D’arco, but only cell studies shed some light on it. Since its compounds haven’t been tested in infected humans or even animals, the results are very preliminary.

Pau D’arco extracts could kill the bacteria that most commonly causes stomach ulcers, Helicobacter pylori, in test tubes. Its many active components worked as well as the standard antibiotics [24].

Taheebo stopped the growth and spreading of 10 different strains of gut bacteria in the lab. It was active even against bacteria that can cause serious symptoms in humans. Importantly, Taheebo did not harm bacteria that are part of the normal healthy gut flora, such as various Bifidobacterium and Lactobacillus strains [2].

Together with antibiotics, beta-lapachone could combat hard-to-treat bacteria resistant to most antibiotics (MRSA) in test tubes [25].

Beta-lapachone also killed fungi that cause diseases like valley fever and lung infections known as “cave disease”. It could rupture the fungi walls and cause them to die off [26].

A volatile extract of Pau D’arco – made like an essential oil from this tree – had very strong antioxidant activity in cells, similar to well-known antioxidants like vitamin E [28].

In aged mice, beta-lapochene prevented the age-related decline of the muscles and brain. It increased energy use, the activity of energy metabolism genes, and protected the mitochondria [29].

Essentially, Pau D’arco boosts NAD+, the “molecule of youth“ based in the mitochondria. This may have similar effects to the anti-aging mechanisms of calorie restriction and is also involved in the cancer-fighting mechanism of beta-lapachone [30, 29].

Traditionally, Pau D’arco is prepared as a tea from the inner bark of the tree – Taheebo. Pau D’arco is now sold as tea, alone or in combination with other herbs. Many compare the taste of Taheebo to licorice or cinnamon, which are both also made from tree bark.

Neither Pau D’arco nor beta-lapachone, the active component, have been approved for clinical use due to the lack of clinical research. Regulations set manufacturing standards for them but don’t guarantee that they’re safe or effective. Speak with your doctor before supplementing.

Because this supplement and its active compounds have only been tested in animal and cell studies, there are no clinical trials supporting a specific dose or any form of supplementation. Users and manufacturers have established unofficial doses based on trial and error

Pau D’arco may affect blood clotting and vitamin K levels in the body. If you are on blood-thinning medications or have a bleeding disorder, consult your doctor first. You may want to be cautious with this supplement or avoid it altogether [1+].

Ever try supplements that don’t seem to work? People respond differently to diets and supplements because everyone has unique DNA. SelfDecode provides recommendations that are personalized based on YOUR genes to help you stay healthy and avoid infections from viruses like COVID-19!