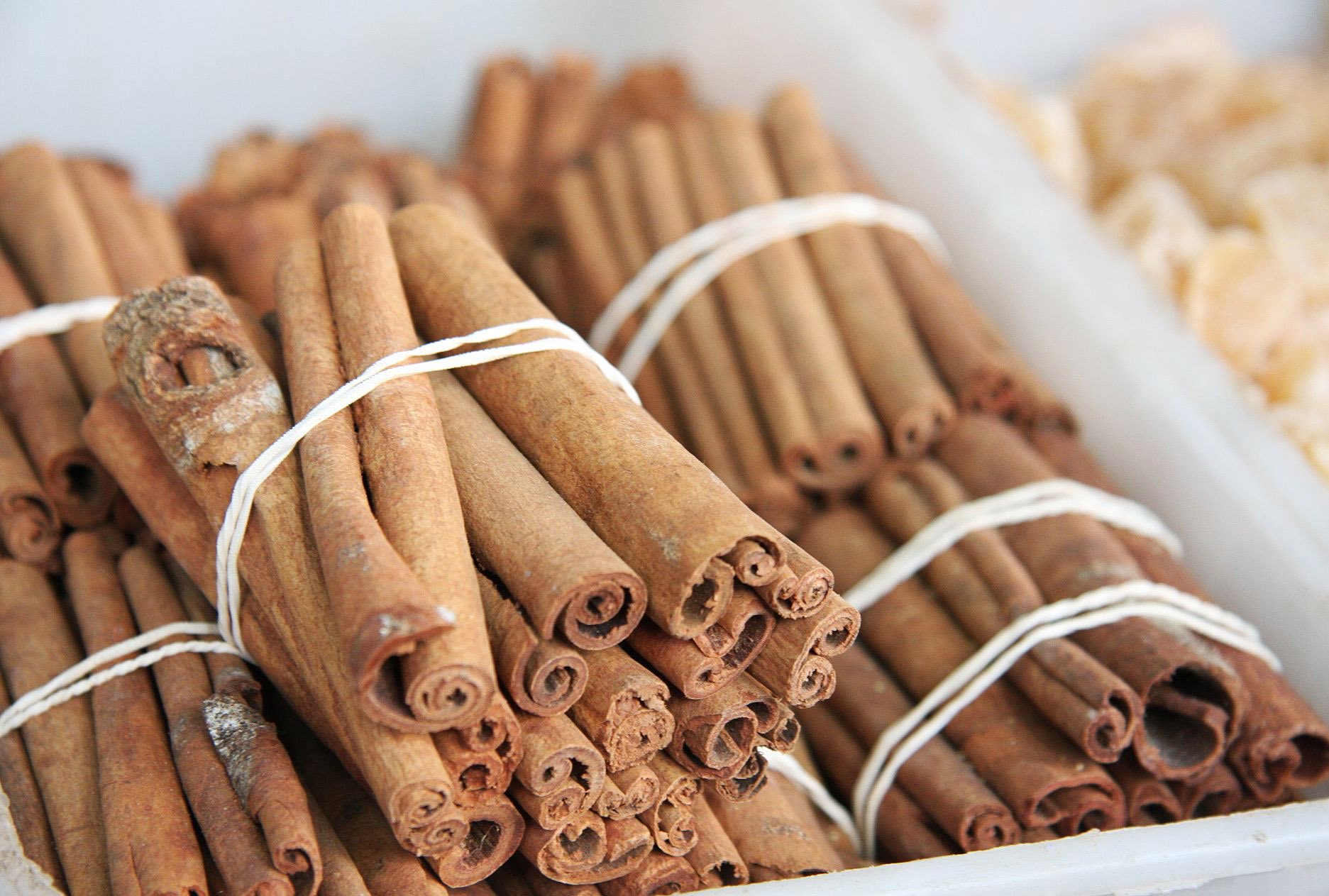 Cinnamon gum, cinnamon rolls, cinnamon in coffee, cinnamon applesauce… Cinnamon is ubiquitous in our everyday taste experience. If used in the right context, it also has several potential benefits to our well-being – from lowering the risk of diabetes to helping with menstrual disorders and overweight.

There are two main varieties of cinnamon available on the market today:

After it is consumed, NaB rapidly passes through the blood-brain barrier (BBB). Similarly, after the whole spice cinnamon has been consumed, NaB can be detected in the hippocampus of the brain [2].

The following benefits are attributed to the spice cinnamon and/or its metabolite, sodium benzoate:

In a clinical trial on 80 women, cinnamon taken during the first 72 hours of a menstrual cycle reduced menstrual cramps [3].

Although limited, the evidence suggests that cinnamon may help with menstrual disorders (especially with PCOS). You may discuss with your doctor if taking cinnamon as an add-on to your treatment regime is recommended. Never take cinnamon in place of what your doctor recommends or prescribes.

Cinnamon also reduced blood sugar and insulin resistance in 2 clinical trials on 52 obese people and one trial on 116 people with metabolic syndrome, but not in another trial on 10 prediabetic people [20, 21, 22, 23].

A dietary supplement with cinnamon, chromium, and carnosine decreased fasting blood sugar and promoted weight loss in a clinical trial on 62 obese, pre-diabetic people. However, honey supplemented with these compounds was ineffective in another trial on 12 people with type 2 diabetes [24, 25].

In 3 clinical trials on 52 healthy people, cinnamon lowered blood sugar levels after meals. Its compound cinnamyl isobutyrate was similarly effective in another trial on 26 people. Continued cinnamon intake for 14 days improved blood sugar control and insulin sensitivity in 8 healthy men, but the effects quickly disappeared when they stopped taking it [26, 27, 28, 29, 30].

Cassia cinnamon (C. burmannii) helped lower blood sugar levels after meals in 30 healthy people and 10 obese women. However, it had no effect on insulin sensitivity in these obese women and in 21 prediabetic people. It was equally ineffective at lowering fasting sugar in 60 people with type 2 diabetes [31, 32, 33, 34].

Although most clinical trials suggest that Ceylan (but not Cassia) cinnamon improves blood sugar control and insulin sensitivity, there are many studies that failed to show any effects. For this reason, it’s difficult to draw conclusions. Further clinical research is needed to shed some light on this potential benefit of cinnamon.

Cinnamon’s active compounds may help with diabetes by:

Cinnamon lowered total cholesterol in a clinical trial on 28 healthy volunteers, but had no effect on blood lipids or blood vessel function in another trial on 9 people [52, 53].

However, it failed to lower blood lipids in 2 trials on over 150 people with this condition and had no effect on heart rate in another trial on over 100 prediabetics [55, 56, 57].

Taken together, some studies suggest that cinnamon may help prevent heart disease by lowering blood pressure and improving blood fat profile (especially in people with metabolic and polycystic ovarian syndromes), but the results are mixed. More clinical research is needed to clarify this potential benefit.

In a clinical trial on 105 healthy people, a mouthwash with cinnamon was almost as effective as a conventional antimicrobial (chlorhexidine gluconate) at reducing plaque and preserving gum health [67].

In another trial on 15 healthy people, chewing gum with cinnamon reduced the salivary counts of the bacteria that cause bad breath [68].

Cinnamon also inhibited the bacteria that cause cavities and gum disease in test tubes [69].

Although the results are promising, there are too few clinical trials to claim that cinnamon helps preserve oral health. More clinical research is required.

Women with polycystic ovarian syndrome lost weight after taking cinnamon capsules for 8 weeks in a trial on 84 women [7].

However, cinnamon extract had no effect on body weight in a clinical trial on 28 healthy people [52].

Cinnamon blocked the absorption of carbs in animal studies [35, 36].

Although the studies suggest that cinnamon may help lose weight in people with type 2 diabetes or polycystic ovarian syndrome, the evidence is insufficient. More clinical trials on larger populations are needed to draw this conclusion for certain.

Cinnamon reduced oxidative stress in a clinical trial on 22 overweight prediabetic people, possibly helping prevent the onset of type 2 diabetes. However, it failed to improve the antioxidant status in another trial on 44 people already suffering from this condition [20, 19].

In a study that compared the antioxidant activity of 26 spices, cinnamon ranked highest [76].

Cinnamaldehyde/cinnamon activated Nrf2, the most important pathway for increasing our natural and innate antioxidant defense, in colon cells [77].

Two small clinical trials (with mixed results) and some animal and cell-based research are insufficient to attest to the effectiveness of cinnamon as an antioxidant. Larger, more robust clinical trials are needed.

In a clinical trial on 60 people with intestinal Candida infections, capsules with cinnamon and pogostemon oil resolved the infection in 72% and improved it in 28% [78].

However, cinnamon extract was ineffective against stomach ulcer-causing Helicobacter pylori in a small trial on 15 infected people [79].

Again, the evidence is insufficient to support the use of cinnamon in people with gut issues. More clinical trials on larger populations are required to shed some light on this potential benefit.

The combination of cinnamon and vinegar increased satiety immediately after meals, indicating an additive effect of the 2 substances, in a clinical trial on 27 people [28].

However, cinnamon alone (1-3 grams) increased GLP-1 (a gut hormone that triggers the production of the satiety-promoting neurotransmitter orexin) levels but had no effect on satiety, stomach emptying in 2 small trials on 24 people [53, 108, 109].

No clinical evidence supports the use of cinnamon for any of the conditions listed in this section. Below is a summary of the existing animal and cell-based research, which should guide further investigational efforts. However, the studies should not be interpreted as supportive of any health benefit.

Both the twigs and leaves of cinnamon were highly anti-inflammatory in studies in white blood cells (macrophages) [110, 111, 112].

Cinnamic aldehyde, a constituent of cassia cinnamon, had strong anti-inflammatory activity in mice and cells [114].

Sodium benzoate, a cinnamon metabolite, was effective against multiple sclerosis in animal models [118, 121, 122].

Cinnamon reduces risk of Alzheimer’s Disease. It does this by blocking the accumulation of tau protein in the brain, which is the main characteristic of Alzheimer’s [151, 152, 153].

It reduces the risk of Parkinson’s Disease. In a mouse model of Parkinson’s disease, cinnamon helped to protect neurons, normalize neurotransmitter levels, and improve motor function [154].

Out of 69 medicinal plants tested in a study in test tubes, cinnamon was the one most effectively inhibiting HIV-1 [216].

In rats with giardiasis, both cinnamon and ginger extracts reduced intestinal damage and the counts of the parasite (Giardia lamblia) in the feces [217].

Cinnamon essential oil and its compounds cinnamaldehyde, and eugenol inhibited the formation of biofilms, while cinnamaldehyde and hydroxycinnamic acids acted as quorum-sensing inhibitors [219, 220, 221, 222].

Cinnamon’s metabolite sodium benzoate increased Tregs in mice, which can be important for clearing some infections. They are crucial for the establishment of a functional Th17 response after the infection in the gut (with the help of IL-2) [50, 223].

Note, however, that most of the studies were done in test tubes. Further clinical research is needed to determine if cinnamon may be of any use to fight the infections caused by these microorganisms.

Below, we will discuss some preliminary research on cinnamon’s potential anticancer effects and mechanisms. It’s still in the animal and cell stage and further clinical studies have yet to determine if its extract may be useful in cancer therapies.

Do not under any circumstances attempt to replace conventional cancer therapies with cinnamon or any other supplements. If you want to use it as a supportive measure, talk to your doctor to avoid any unexpected interactions.

Cinnamon appears to be safe for most people when taken by mouth in amounts up to 6 grams daily for 6 weeks. However, some people may have allergic reactions.

Cassia cinnamon contains coumarin, the parent compound of the blood thinner warfarin. Due to concerns about the possible effects of coumarin, the German Federal Institute for Risk Assessment warned against consuming large amounts of cassia cinnamon in 2006.

Therefore, if you want to take cinnamon as a supplement, it’s safer to use Ceylon cinnamon.

8 Hawthorn Benefits + How to Use to Lower Blood Pressure

6 Benefits of Cat’s Claw + Side Effects