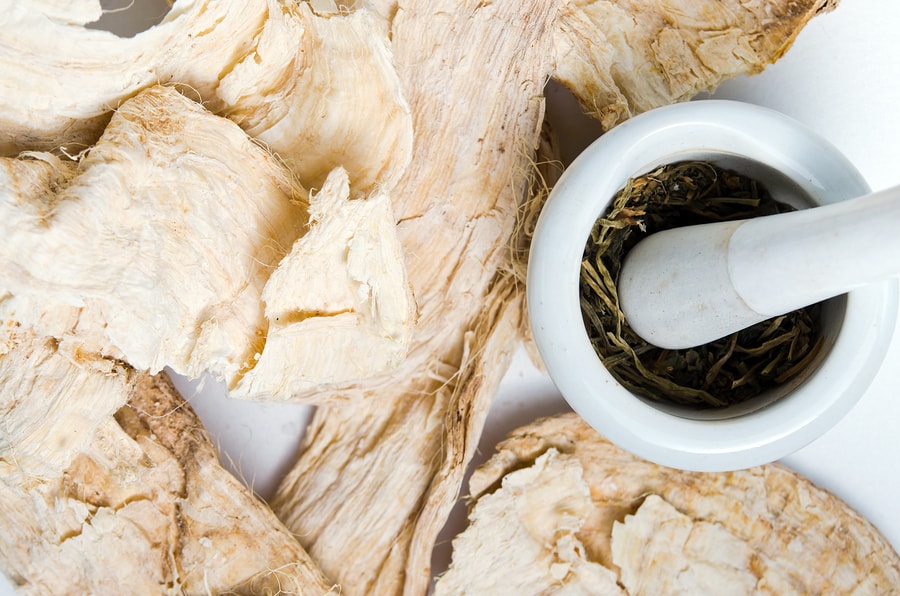 The roots of Pueraria mirifica are cherished in Thailand for their alleged anti-aging and antioxidant properties. People take this plant for menopausal complaints, cognitive effects, and heart and bone health. However, limited evidence supports most of its traditional uses. Read on to find out more about the purported benefits and side effects of Pueraria mirifica.

What is Pueraria mirifica?

Also known as White Kwao Krua, Pueraria mirifica is a medicinal plant that originates in Thailand. People in Thailand have thought that this herb has anti-aging properties for centuries [1].

Pueraria mirifica is a woody plant that climbs as it grows. The real interest is in the roots, which are large tubular structures that contain many starch granules and are white on the inside [1].

However, Pueraria mirifica supplements have not been approved by the FDA for medical use. Supplements generally lack solid clinical research. Regulations set manufacturing standards for them but don’t guarantee that they’re safe or effective. Speak with your doctor before supplementing.

Pueraria mirifica is a plant that originates in Thailand. The roots are used in traditional medicine.

The roots contain phytoestrogens, which are plant compounds that mimic the female hormone estrogen. At least 17 phytoestrogens have been identified, which can be categorized into isoflavonoids, coumestans, and chromenes. The most common phytoestrogen in Pueraria mirifica is miroestrol [1].

The exact phytoestrogen content of the plant depends on its location and variety [1].

Also, plants harvested in the summer had a much higher phytoestrogen content than in the rainy and winter seasons [1].

In Pueraria mirifica herbs, phytoestrogens are found in the leaves, stems, and roots. However, the phytoestrogen content is much larger in the roots [1].

Scientists hypothesize that the phytoestrogen content of Pueraria mirifica mimics the effects of the female sex hormone estrogen [1].

In two small studies, heavy drinkers who took Pueraria mirifica extract for 1-4 weeks drank less beer when given an opportunity [2, 3].

In another trial, binge drinkers who took the extract about 2 hours before drinking had 37% fewer beers, compared to placebo [4].

However, evidence suggests that Pueraria mirifica does not appear to decrease alcohol craving in general or sobriety in chronic alcoholics [5].

The following purported benefits are only supported by limited, low-quality clinical studies. There is insufficient evidence to support the use of Pueraria mirifica for any of the below-listed uses.

In a small clinical trial of 5 volunteers, an oral supplement of P. mirifica reduced symptoms of menopause. Patients received a 200 mg daily dose for 4 months, followed by 200 mg every 2 days. These patients showed decreases in menopausal symptoms, including [6]:

In one study (DB-RCT) of 71 healthy postmenopausal women, the women received either a placebo or 20 mg, 30 mg, or 50 mg of Pueraria mirifica supplement. Pueraria mirifica was effective at decreasing vaginal dryness [7].

Another study (DB-RCT) of 37 premenopausal and postmenopausal women determined that 50 mg and 100 mg of Pueraria mirifica were effective at reducing hot flashes and night sweats [8, 9].

Despite these promising findings, large-scale clinical trials are needed to confirm the effectiveness and safety of this plant for menopausal symptoms.

Limited evidence supports the use of Pueraria mirifica for bone health in humans.

We identified only one clinical trial (DB-RCT) of 71 postmenopausal women. In this study, 24 weeks of P. mirifica supplements improved bone structure. The phytoestrogens in the plant are hypothesized to slow bone deterioration [10].

In rats, the ingestion of Pueraria mirifica with meals prevented osteoporosis, increased bone formation, and reduced bone loss and deterioration [11, 12].

According to some theories, postmenopausal women have a decreased ability to process fats. This can lead to fat deposits in arteries and veins, which increase heart disease risk.

We can’t draw any conclusions from a single clinical study that had a very small sample size. Further studies are needed.

No clinical evidence supports the use of Pueraria mirifica for any of the conditions listed in this section.

The antioxidant effects of this herb have not been investigated in humans yet.

Though people traditionally take P. mirifica to improve memory, the effects of this plant on brain function in humans is completely unknown.

In rats, Pueraria mirifica supplementation increased the strength of signals sent between neurons. This means that it can increase the effectiveness and efficiency of brain function [18].

Proper safety trials on this plant are lacking. Its effects on cancer risk in humans are completely unknown.

We don’t yet know how Pueraria mirifica affects cancer risk. In animal experiments, it had both breast cancer-prevetive and -promoting effects.

Pueraria mirifica is most commonly taken orally, usually in pill form. Traditionally, pills are made of finely ground root powder, but some commercial brands use the root extract [1].

Most studies on humans used 20 mg, 30 mg, or 50 mg per day doses. Further research is needed before a safe and effective dosage can be established [10, 9].

In mice, P. mirifica did not have toxic effects when the supplement was given to them in a powder form. When treated with a proportional dose to ones taken by humans, no abnormalities were found. But, when the dose was substantially increased, they found abnormalities in the blood [23].

Another mouse study found that high doses of P. mirifica can lead to decreased fertility, reproductive disorders, and the development of endometrial and breast cancer [24, 25].

Proper safety data on this plant are lacking, while animal studies point to potentially serious side effects. Caution is advised.

Few human clinical trials have been conducted. The efficacy and long-term safety of Pueraria mirifica are unknown.

One user said she had a quick decrease in her menopausal symptoms.

Many users have claimed that Pueraria mirifica has enlarged their breasts.

One user said that after taking Pueraria mirifica they began to shake and felt weak as if they needed to eat something.

Another user said that after taking a Pueraria mirifica supplement, they felt weak and their heart hurt.

Pueraria mirifica is a plant that grows in Thailand, where its roots are used in traditional medicine.

Despite some recent scientific interest, the potential health benefits and risks of this plant are still largely unknown.

According to a couple of trials, Pueraria mirifica extract might reduce the amount of alcohol people drink, especially in heavy drinkers and binge drinkers.

Scientists discovered that it contains many phytoestrogens, plant compounds that mimic estrogen in the body. Some evidence suggests Pueraria mirifica may improve menopausal symptoms, but further research is needed.

Human safety data on Pueraria mirifica are lacking, while animal experiments point to potentially serious side effects. Caution is advised.