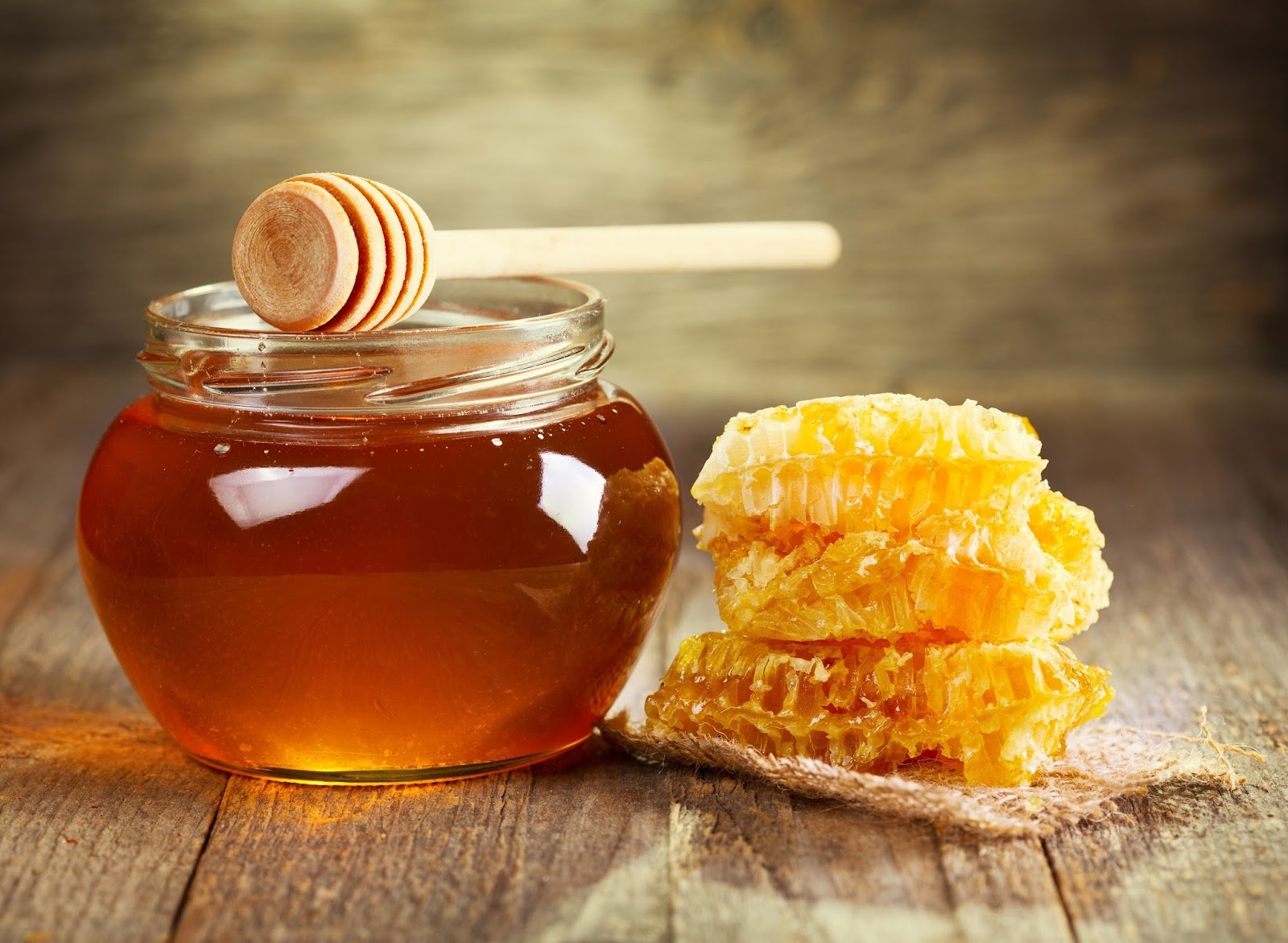 Honey contains hidden nutritional and medicinal values. Raw, unprocessed types are nutritious, antimicrobial, and good for the skin & hair. The Bible itself suggests eating honey. But what does the science say? Read this post to learn the health benefits of honey and its effects on blood sugar levels.

Honey is a sweet food made by bees taking nectar from flowers. There are different types of honey, but the most common kind comes from the genus Apis, known as honeybees. Honeybees convert the nectar to honey by a regurgitation process and evaporation.

As you can imagine, depending on the available plants, the taste, constituents, and benefits of honey are different [1].

Depending on the type, honey can be a pain reliever, antibacterial, or pure sugar (like artificial honey).

Raw honey retains more of its beneficial bioactive compounds. It is especially rich in flavonoids and other polyphenol antioxidants that can reduce inflammation, protect the brain, fight viruses and bacteria, and boost cognition [2, 3].

The concentration of honey is also very important. The bacteria-fighting potency among the different kinds of honey can vary up to 100-fold, depending on its geographical, seasonal and plant source as well as harvesting, processing and storage conditions [2].

However, commercially available honey is often heat-processed. Higher temperatures can reduce the quality of honey and cause it to lose many beneficial enzymes, nutrients, and antioxidants. Heating honey together with ghee doesn’t reduce the concentration of beneficial substances but can cause harmful products to build up [4].

For this reason, you may want to find high-quality, natural, raw honey.

In rats, infected skin wounds treated daily with honey for 7 days had a better outcome than saltwater treatments.

After 7 days, the bacteria culture showed that honey was effective in the management of infected skin wounds by significantly inhibiting bacterial growth and having a positive influence on wound repair [5].

When the concentrations of honey were increased, the antibacterial effects against Staph bacteria and E.Coli were enhanced [6].

A lab experiment showed that pure honey killed most of bacteria and fungi, except for Pseudomonas aeruginosa and Clostridium oedematians [9].

A literature review found that honey is a great antimicrobial because of its high viscosity that provides a barrier to prevent infections. The antimicrobial property comes from the enzymatic production of hydrogen peroxide [11].

Do you have problems maintaining balance to your blood sugar levels?

This Blood Sugar report is for you!

Learn which of your genes can be contributing to your problem, and what you can do to counteract the negative effect of those genes!

In 70 women with vaginal candidiasis, honey + yogurt were similar to clotrimazole cream and even better at relieving some symptoms [12].

Substituting sugars with honey in processed food can inhibit the harmful and genotoxic effects of mycotoxins, and improve the gut microflora. Honey increased colon Bifidobacteria and Lactobacilli count the mice [13].

In a review of 6 clinical trials, honey was more effective as a wound dressing than silver as measured by the number of days the wound needed to heal [15].

In patients with diabetic foot ulcers, honey was able to reduce the rate of amputation.

172 patients with non-healing diabetic foot ulcers received a thick layer of honey on their wound. Wounds became healthy within 7-35 days. Of those 172 patients, only 3 had to get their big toe amputated and 2 had below the knee amputations. This study concluded that honey greatly decreased the rate of amputations [16].

Skin grafts are used to cover burn injuries and honey has been shown to increase the adherence of skin grafts to wound beds. In a clinical trial, 30 patients used honey as their graft and 30 used a regular dressing or suturing.

The patients treated with honey reported a significantly reduced infection rate on day 5 and had reduced pain. They also had a shorter mean hospital stay. This study concluded that medical honey can be used for the fixation of a split-thickness skin graft [18].

However, in 19 trials it was found that for burns, compression bands alone were just as effective as honey [20].

4) Nourishes the Skin and Hair

According to a clinical review, honey can be used in rejuvenating the skin as well as slowing down the formation of wrinkles. It also helps make hair smooth and regulates the pH while preventing pathogen infections [21].

Another article suggested using honey as a face wash and facial cleansing scrub for pimples and dry skin [22].

A study in 30 volunteers showed that diluting honey in water and applying it to the scalp lowers hair loss, itching, and dandruff [23].

Honey can help oral mucositis. A study was done on 28 patients in which 14 were given honey to rub on and the other half got water. Out of the patients who had honey, only 1 developed grade III oral mucositis compared to 9 patients with water treatment [24].

In a systematic review of 8 clinical trials, honey significantly benefited patients with mucositis due to radiation therapy [25].

A clinical trial showed that honey significantly lowered frequency, severity, and annoyance of cough in 300 children. It also improved sleep quality for the children and their parents [26].

For acute coughs for children, honey was better than no treatment, diphenhydramine (Benadryl), or placebo for relief. Honey was not better than dextromethorphan though and there was no strong evidence either for or against the use of honey to treat an acute cough [27].

Another study found that a teaspoon or two of honey can help suppress a cough [28].

Honey may be used as an additional treatment for mucositis, childhood cough, persistent post-infectious cough and after tonsillectomy [29].

In a clinical trial of 48 people, honey decreased total cholesterol, LDL, and triglycerides, while increasing HDL or “good” cholesterol [31].

In healthy humans, buckwheat honey increased the plasma antioxidants and protected them from oxidative stress. The substitution of honey in some foods instead of sweeteners could result in an enhanced antioxidant defense system [33].

In a study of 25 healthy men, buckwheat honey was a stronger antioxidant, while clover honey had the widest range of antioxidant molecules [1].

The following health effects have been observed in animal and cell-based studied only; they should not be interpreted as supportive of actual health benefits in humans until more research is done.

An animal study concluded that KOK has remarkable antiplatelet and antithrombotic effects with a lower risk of bleeding [35].

Rats treated with honey had protective effects on heart attacks [36].

According to a study on mice, honey enhances the probiotic bacteria, which leads to beneficial effects such as detoxification. The study recommended using honey instead of sugar in processed foods to prevent fungi growth and other toxins [13].

In rats, Honey significantly reduced arthritis. This study concluded that honey has anti-inflammatory effects and may be used to treat acute inflammatory conditions [37].

In rats, honey reduced anxiety, pain, seizures, and had antidepressant effects. It could enhance brain antioxidants while its polyphenols have nootropic and neuroprotective properties. These polyphenols neutralize free radicals that lead to neurotoxicity, aging, and the buildup of harmful brain proteins, including amyloid beta found in Alzheimer’s disease patients [3].

When tested on five types of rat and mice tumors, honey showed anti-metastatic and moderate anti-tumor effects. Much more research is needed to verify the potential antitumor effects of honey [38].

Despite its potential benefits, honey is high in sugar (82%) and has a glycemic index around 80, which makes it a poor choice for diabetics. In tiny amounts, however, it may be a healthier alternative to table sugar.

On the other hand, recent studies have pointed to a paradoxical blood sugar-lowering effects of honey and started researching it as a healthier sugar substitute [39, 40].

In 8 healthy volunteers, insulin and C-peptide elevation were higher after glucose than after honey [10].

Further research should clarify the effects of honey on blood sugar and its potential use as a sugar substitute in diabetics and healthy people.