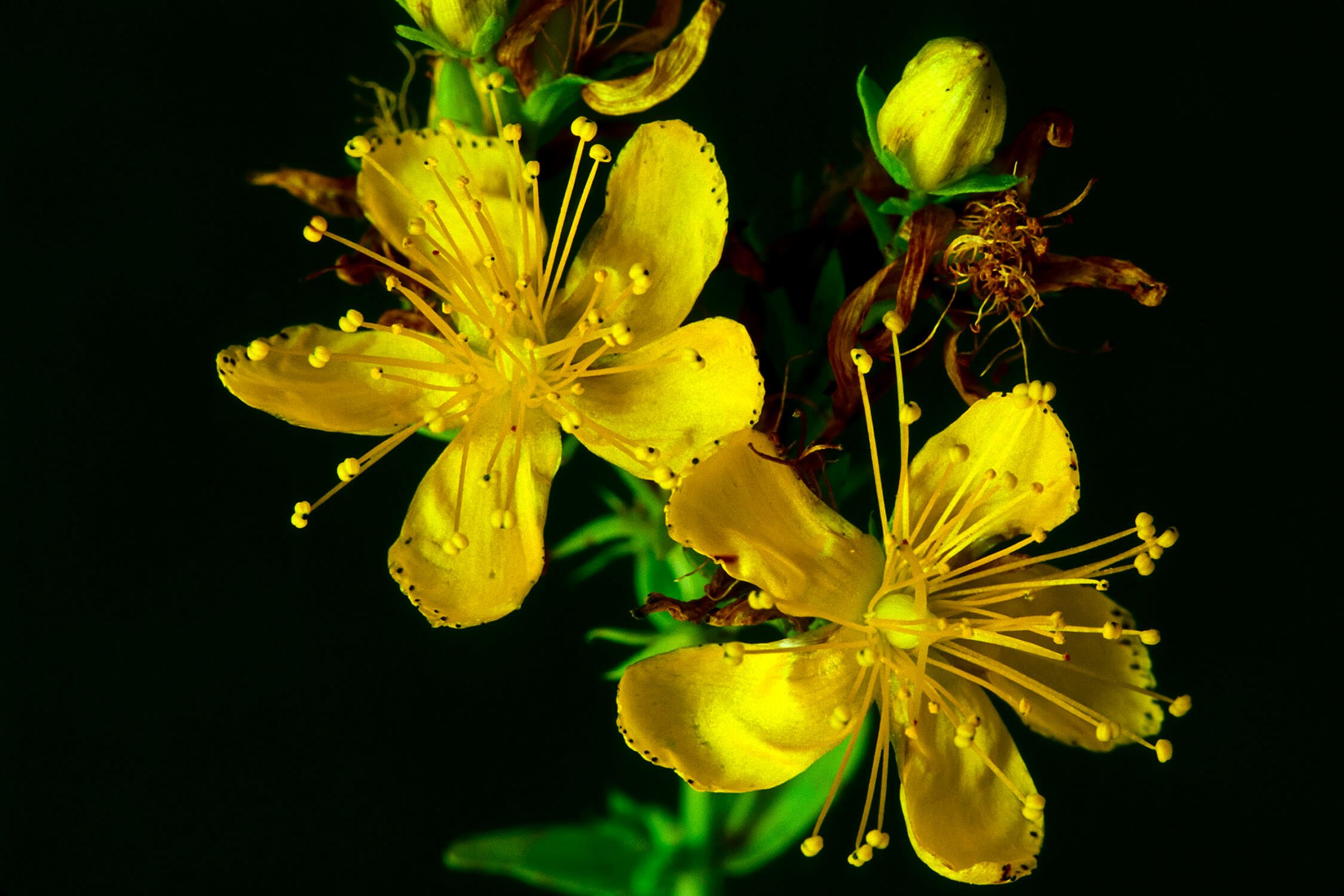 St. John’s wort is a medicinal plant that has received great attention from researchers due to its purported antidepressant effects. But what does the science have to say about these potential benefits? Read on to learn more about the mechanisms, potential health applications, negative side-effects and other possible risks associated with St. John’s wort!

What is St. John’s Wort?

St. John’s wort (Hypericum perforatum) is a plant with yellow flowers whose medicinal uses were first recorded in ancient Greece. St. John’s wort is commercially available in a variety of forms, including teas, tablets, capsules, and liquids that contain concentrated extracts [1].

St. John’s wort is used as a medicinal herb, and is perhaps best-known for its potential antidepressant effects. Although some early clinical trials have reported that extracts of this plant may be as effective as antidepressant medications for the treatment of depression, other studies have reported conflicting or inconsistent results, meaning that the overall picture is not yet fully clear [2].

Due to a lack of sufficient evidence regarding its efficacy and long-term safety, St. John’s wort has not yet been FDA-approved for the treatment of any specific medical condition or other application [3].

In addition, St. John’s wort can have significant, even life-threatening interactions with many common prescription medications [2]. Therefore, it is extremely important to talk to your doctor before deciding to supplement with St. John’s wort!

According to some preliminary research, the main active compounds in St. John’s wort are hypericin and hyperforin. These compounds have several potential effects, including [4]:

Below are some of the purported effects and potential medical uses of St. John’s wort. However, keep in mind that the research behind many of these possible applications is still in a relatively early stage, and that firm conclusions cannot yet be made about its efficacy or long-term safety until much more additional research is done.

Additionally, keep in mind that none of the information contained in this post should ever be used to replace conventional medical treatment. If you believe you may be suffering from one of the health conditions discussed below, it is vitally important to talk to your doctor to obtain a formal diagnosis and determine the best course of treatment.

Similarly, if you are interested in trying out any of the complementary strategies discussed below, be sure to discuss these with your doctor first in order to determine if they are appropriate for you, as well as to help minimize the risk of any negative interactions these may have with any current medications you are taking, other pre-existing health conditions, and other potential relevant factors that could impact the course of your treatment.

The majority of clinical studies on St. John’s wort has focused on its antidepressant effects.

A systematic review of data from over 35 different studies (including data from a total of 6,993 patients) reported that St. John’s wort appeared to be more effective than a placebo for the treatment of depression. The review also reported that St. John’s wort was associated with relatively fewer adverse side-effects compared to conventional antidepressant medications (such as SSRIs) [6].

A different review of 27 clinical trials (including data from 3,808 patients) has reported that St. John’s wort may be as safe and effective as SSRIs (a common class of antidepressant drugs) for the treatment of mild-to-moderate depression [7].

In yet another review of 29 clinical trials (including data from a total of 5,489 patients), researchers concluded that St. John’s wort may be [8]:

However, not all studies have supported the use of St. John’s wort for depression. In particular, there are several clinical trials that suggest that this plant extract may not be effective for more severe forms of depression [9, 10].

Therefore, more evidence will still be needed to determine whether or not St. John’s wort may be clinically useful in treating or managing depression or other mood disorders.

There’s some early evidence that St. John’s wort may help reduce the symptoms of menopause.

For example, one randomized placebo-controlled study of 100 women reported that taking a St. John’s wort extract for 8 weeks may reduce the severity and frequency of “hot flashes” associated with menopause [11].

According to another randomized clinical trial in 47 women, St. John’s wort extract was reported to improve quality of life and reduced sleep problems associated with menopause [12].

A randomized double-blind clinical trial of 144 women who had recently given birth has reported that topical application of St. John’s wort may improve wound healing and minimize scar formation after a cesarean section procedure [13].

However, this is based on only one study, and much more research will still be needed to determine if St. John’s wort may have beneficial effects on wound healing and recovery in other contexts as well.

“Somatization disorder” is a term for when a person experiences physical health symptoms — such as pain, gastrointestinal problems, or other neurological issues — that can’t be directly traced to any disease or other potential physical cause (such as side-effects from a medication) [14].

According to one randomized placebo-controlled study of 184 patients diagnosed with a somatization disorder, an extract of St. John’s wort was reported to improve symptoms in about 45% of patients (compared to just 20% in those who were given an inactive placebo treatment) [15].

However, St. John’s Wort has not been FDA-approved for any specific medical or other use — and therefore, official dosage information is lacking. However, according to one large-scale review of over 30 different clinical studies of St. John’s Wort, a relatively common dosage is 300 mg of the extract, taken 3 times per day, for at least 4 weeks [17].

A number of clinical studies have reported that St. John’s wort appears to cause fewer adverse side-effects compared to standard antidepressant medications [6, 8].

However, when taken in large doses, St. John’s wort extract has been reported to cause severe skin reactions to sunlight [18, 19].

Below are some of the commonly-reported negative side-effects of St. John’s wort. This list does not cover all possible side effects. Let your doctor know if you are experiencing any kind of side effects while taking this supplement [6].

Most of the limited data about St. John’s Wort available so far concerns supplements that are taken orally. In contrast, there is insufficient evidence to determine the safety St. John’s wort when taken in “topical” forms (forms that are applied directly to the skin).

Note that this is not a complete list of all potential drug interactions. Always let your doctor know of all the medications and supplements you are taking, as only a qualified medical professional can help you determine the safest and most effective course of treatment.

Some of the potentially serious drug interactions with St. John’s wort that have been reported in the scientific literature so far include [2]: