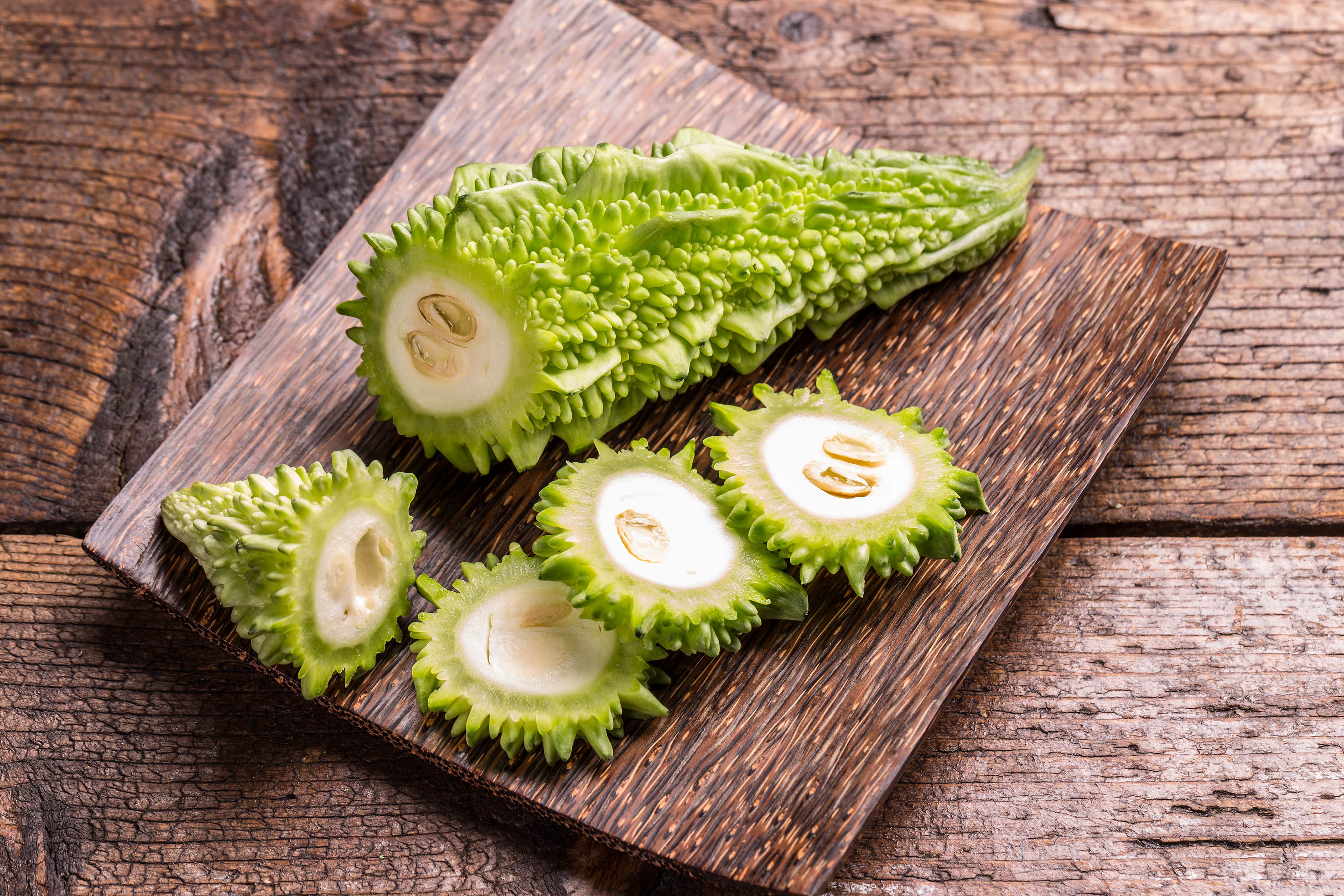 Bitter melon is known to contain a variety of vitamins and minerals, making it a nutritious fruit. In addition, it contains blood sugar-lowering compounds and has been traditionally used by diabetics for this reason. Read on to know more about the potential health benefits of bitter melon and its main adverse effects.

What Is Bitter Melon?

Its fruit, with a remarkably bitter flavor, is used for cooking and also for its blood sugar-lowering potential [1].

Bitter melon is a rich source of vitamins including vitamins A, C, E, B1, B2, B3, and B9. In addition, it also contains minerals such as potassium, calcium, zinc, magnesium, phosphorus, and iron [1].

Both bitter melon and its component polypeptide-p lowered blood sugar in old animal studies and preliminary trials on people with diabetes. Proponents claim that bitter melon has the potential to be used as a less antigenic replacement to mainstream insulin therapy in diabetics [2, 3, 4].

In a clinical trial on 52 people at risk of developing diabetes, bitter melon juice lowered fasting blood sugar levels. In contrast, it was ineffective in a small trial on 5 non-diabetic but overweight men [5, 6].

In a clinical trial on 100 people with moderate (non-insulin-dependent) diabetes, drinking a solution made from its pulp lowered blood sugar both before and after meals. A similar solution enhanced the effect of antidiabetic drugs such as metformin and glibenclamide in another trial on 15 people [7, 8].

In a clinical trial on 42 people with metabolic syndrome, bitter melon improved the condition by reducing insulin resistance [11].

When compared to antidiabetic drugs, bitter melon was as effective as rosiglitazone in a trial on 25 people with type 2 diabetes but less than metformin and glibenclamide in 2 trials on over 200 people with this condition. Interestingly, it was more effective than glibenclamide at preventing clogged arteries [12, 13, 14].

All in all, the evidence is limited but suggests that bitter melon may help lower blood sugar levels in people with mild, uncontrolled diabetes. You may discuss with your doctor if it may help as an add-on to your current treatment regime. Importantly, never use bitter melon in place of proven antidiabetic medication prescribed by your doctor.

The following purported benefits are only supported by limited, low-quality clinical studies. There is insufficient evidence to support the use of bitter melon for any of the below-listed conditions. Remember to speak with a doctor before taking bitter melon and never use it as a replacement for approved medical therapies.

In a clinical trial on 74 people with knee osteoarthritis, supplementation with bitter melon capsules reduced pain and the need for painkillers [15].

In a clinical trial on over 100 people with metabolic syndrome, a combination of bitter melon, red yeast rice, chlorella, soy, and licorice extracts lowered total and LDL cholesterol [17].

Again, only one clinical trial (which tested bitter melon in combination with other herbal extracts) and some animal research back this potential health benefit. Further clinical research testing bitter melon alone is needed.

No clinical evidence supports the use of bitter melon for any of the conditions listed in this section. Below is a summary of the existing animal and cell-based research, which should guide further investigational efforts. However, the studies should not be interpreted as supportive of any health benefit.

Bitter melon is used in Turkish folk medicine for the treatment of stomach ulcers. In rats, bitter melon extract improved and prevented ulcers caused by alcohol, indomethacin, and diethyldithiocarbamate [19].

The leaves of the bitter melon are known to have antimicrobial properties against several potentially infectious microbes such as E. coli, Staphylococcus, Pseudomonas, and Salmonella. In animal studies, the fruit has been used to fight off tuberculosis and H. pylori, which causes stomach ulcers [20].

Below, we will discuss some preliminary research on bitter melon’s potential anticancer activity. Note, however, that many substances have anti-cancer effects in cells, including downright toxic chemicals like bleach. This doesn’t mean that they have any medical value. On the contrary, most substances (natural or synthetic) fail to pass further clinical trials due to a lack of safety or efficacy.

Bitter melon contains trypsin inhibitor I and II, two proteins that blocked key factors in the blood clotting process such as XIIa and Xa in test tubes [27].

Bitter melon may help lose weight by increasing the activity of AMPK, which increases glucose usage until its depletion, ultimately resulting in increased fat burning [18].

Keep in mind that the safety profile of bitter melon is relatively unknown, given the lack of well-designed clinical studies. The list of side effects below is not a definite one and you should consult your doctor about other potential side effects based on your health condition and possible drug or supplement interactions.

Bitter melon was generally well tolerated in clinical trials and only caused some mild adverse effects such as [5, 10, 11]:

Vicine, a compound typically found broad beans but also present in bitter melon seeds, causes an allergic disease called favism in which red blood cells break down. However, no cases of favism caused by bitter melon have been reported [1].

α-trichosanthin along with α-momorcharin, both of which are found in bitter melon seeds, inhibited pregnancy and induced the termination of early pregnancy in mice. For this reason, pregnant women or those trying to conceive should avoid bitter melon [28, 29].

Children should also avoid bitter melon, since its red arils have been reported to cause toxicity in some cases [18].

Due to its blood sugar-lowering effects, bitter melon may add to the effects of antidiabetic medication and cause blood sugar levels to drop too low. People on this type of medication should consult their doctor before taking bitter melon [1].

Lectins from bitter melon seeds may not only cause food intolerance, but also reduce protein production in the body [31].