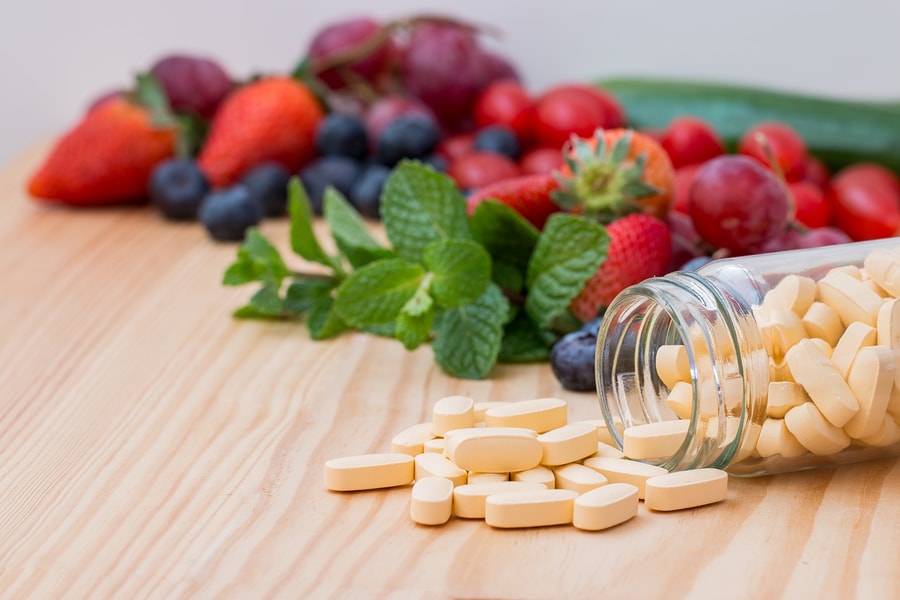 ZMA, a nutritional supplement, is lauded by bodybuilders to increase muscle mass and strength, improve sleep and immune function, and even increase testosterone levels. However, scientific research supports only a fraction of these claims and warns about important drawbacks. Read on to learn more about ZMA benefits, side effects, and interactions.

ZMA, or Zinc Magnesium Aspartate, is a nutritional supplement that contains zinc monomethionine aspartate, magnesium aspartate, and vitamin B6 [1].

Zinc is a trace element, meaning it is only needed in small amounts in the body but is essential for humans. Magnesium is an essential macroelement (needed in relatively large amounts). Vitamin B6 may increase the effect of zinc and magnesium and deliver additional benefits on energy production [2, 3, 4].

Many have claimed that ZMA is necessary for bodybuilding and exercise because some evidence suggests that athletes are deficient in zinc and magnesium due to increased exertion. However, other studies found the opposite to be true, while a review found mixed results [5, 6, 7, 8, 9, 10, 11, 1, 12, 13, 14].

Zinc and magnesium deficiencies are also linked to other conditions, such as ADHD, stress/anxiety, and reduced immune function [15, 16, 17].

As ZMA is a nutritional supplement, it works by providing the body with adequate (or excess) levels of zinc, magnesium, and vitamin B6 for proper functioning. As the body does not store zinc, it must be replenished via diet [18, 1, 19].

While some claim that this ratio in ZMA is important for its action, there are no studies to support the claims.

We base most of the health benefits of ZMA solely on comparable studies about each of its components, due to lack of other data. Studies with ZMA exist only for the first two benefits listed.

No valid clinical evidence supports the use of ZMA for any of the conditions in this section. Below is a summary of up-to-date animal studies, cell-based research, or low-quality clinical trials which should spark further investigation. However, you shouldn’t interpret them as supportive of any health benefit.

Interestingly, one of the few studies that tested the effects of all 3 components as the ZMA supplement found no significant changes in hormones, body composition, bench press and leg press, upper- or lower-body muscular endurance, or cycling breathing performance in 42 trained men [1].

In a study with 23 triathletes, magnesium supplementation increased swimming, cycling, and running speed. Zinc levels in the blood were correlated with increased athletic performance in 21 football players (as measured by an exercise test on a cyclo-ergometer machine and blood lactate levels) [22, 23].

A study of 30 healthy adults found that magnesium supplementation and martial arts together increased 2 types of red blood cells, which may help with athletic performance. This same effect was seen with zinc [24, 25, 26].

Despite some positive results for individual components, there’s insufficient evidence to support the use of ZMA for improving athletic performance and strength.

However, ZMA supplementation (30 mg zinc, 450 mg magnesium, and 11 mg vitamin B6) did not affect testosterone levels in the blood of 14 healthy men without nutritional deficiencies. Another study with ZMA found no significant changes in hormones in 42 healthy trained men [31, 1].

Zinc supplementation, in general, may help restore testosterone levels, while the evidence for ZMA is less convincing.

ADHD is a disorder characterized by inattention and hyperactivity. Two reviews suggested that ADHD in children is associated with nutritional deficiency, such as zinc and magnesium [15, 35].

Supplemental levels of zinc (15 mg, twice a day) improved response to ADHD medication in children (52 participants). In another study of children with ADHD, zinc (150 mg/day) improved hyperactive, impulsive, and impaired-socialization symptoms but had no effect on attention deficit symptoms (400 participants) [36, 37].

A large study found that magnesium, zinc, and polyunsaturated fatty acids curbed both attention deficit and hyperactivity issues in 810 children. The combination of magnesium with vitamin B6 was effective in another study of 76 children with ADHD [38, 3].

A review study on micronutrients identified zinc and vitamin B6 (among a few other nutrients) as important to immune function. This may justify the combination of ZMA [41].

Vitamin B6 deficiency slowed white blood cell production in mice, pointing to its role in maintaining a healthy immune system [46].

In a study with 23 triathletes, magnesium supplementation lowered serum cortisol levels, a measurement of stress [22].

A specific multivitamin that contains magnesium and B6 reduced stress levels and increased mood in 60 healthy adult workers [49].

These studies may justify the combination in ZMA, but more evidence is needed.

Zinc prevented exercise-induced fatigue (measured as a drop in thyroid hormone and testosterone levels) in a study of 10 sedentary men. The same result was seen in 10 male wrestlers. Similarly, magnesium supplementation prevented a drop in TSH levels triggered by exhaustion during martial arts training [50, 51, 52].

One study found that blood zinc levels were significantly lower in chronic fatigue syndrome (CFS) patients and that symptom severity was negatively correlated with blood zinc levels. The study concluded that zinc may be effective in attenuating CFS symptoms because of its antioxidant and anti-inflammatory properties [53].

A study found that treating leaky gut with a mixture of anti-inflammatory and antioxidant substances including zinc in CFS patients resulted in a significant improvement of symptoms [54].

While there are quite a few studies of the effects of both zinc and magnesium on humans, there is not much data on zinc, magnesium, and vitamin B6 together.

The main paper referenced by many bodybuilding sources claims that ZMA increased testosterone levels and strength in a study with 27 football players. However, one of the authors owns the company that makes the specific ZMA formulation. The same company funded the research [30].

This points to a massive conflict of interest and makes the results questionable.

Two other studies also looked at the effects of ZMA and did not see changes in testosterone levels or strength (14 and 42 healthy men respectively) [1, 31].

An excess dose of zinc can cause nausea, vomiting, stomach pain, sluggishness (lethargy), and extreme tiredness (fatigue). Even taking a non-toxic dose of 100 to 300 mg of zinc a day can cause copper deficiency with symptoms of anemia, low white blood cells (neutropenia), and reduced immune function [55].

Although rare, it is possible to overdose on magnesium (hypermagnesemia), which can cause abdominal cramping, diarrhea, and nausea [56, 57, 58, 59].

High doses of vitamin B6 can cause neurological effects, skin lesions, sensitivity to light, nausea, and heartburn [60, 61].

That said, the amounts of zinc, magnesium, and B6 present in ZMA are safe and well-tolerated for most healthy people.

ZMA can interact with a variety of other drugs and other supplements because it is composed of zinc, magnesium, and vitamin B6.

ZMA supplements have not been approved by the FDA for medical use. In general, regulatory bodies aren’t assuring the quality, safety, and efficacy of supplements. Speak with your doctor before supplementing.

ZMA supplements are widely available, almost exclusively in pill form, but are also found in powder form. ZMA is available by itself or mixed with other substances meant to encourage muscle development, recovery, or sleep, such as theanine and 5-HTP (5-Hydroxytryptophan).

The below doses may not apply to you personally. If your doctor suggests using ZMA, work with them to find the optimal dosage according to your health condition and other factors.

The only three specific ZMA studies (change in testosterone levels and athletic performance and no changes) used a dosage of ZMA equivalent to [30, 1]:

One user said it improved their migraines and attributed it to the magnesium.

Fight Illness by Keeping Your Body in Shape

Keeping your body healthy is extremely important. SelfDecode gives you genetic-based diet, lifestyle, and supplement tips that can help improve your health and fitness. The recommendations are personalized based on YOUR DNA.

4.2
4
3 Benefits of Melatonin as a Sleep Aid: How does it Work?
Supplements (other)
3
Malic Acid Benefits & Uses + Side Effects
Natural Substances
1
What is Alpha-Lipoic Acid (ALA)? + Dosage & Side Effects