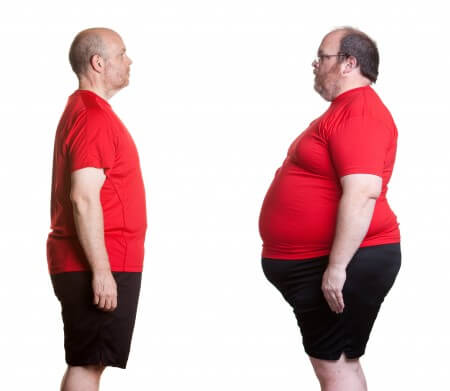 We once thought that weight loss was all about calories in, calories out, or just diet and exercise. Or perhaps, it’s in your genes or hormones like leptin. However, your gut bacteria might actually have more to do with your weight than you think. Read this post to learn about how probiotics could help you lose weight and improve your metabolism.

How May Probiotics help with Weight Loss?

In mice and rats, obesity-related microbes can harvest more energy from food than the microbes that are found in lean animals [1].

Compared with lean mice with normal genes, the gut bacteria of obese mice have more genes that can burn carbohydrates for energy [2].

How the gut bacteria metabolize primary bile acids to secondary bile acids affect our metabolism by activating the farnesoid X receptor, which controls fat in the liver and blood sugar balance [3].

In mice, diet accounts for 57% of changes in their gut microbiome [5].

Gut bacteria from stools of healthy and lean humans transferred to obese people with type 2 diabetes increased insulin sensitivity and gut bacteria diversity in a clinical trial on 18 people . However, this study did not observe significant changes in body mass index 6 weeks after the transfer [7].

Feeding obese and insulin-resistant rats with antibiotics or transplanting them with fecal matters from healthy rats reversed both conditions [9].

Presently, there are several phases 2 and 3 clinical trials for fecal microbiota transplant [12].

While results thus far have shown that fecal microbiota transplant is a promising therapy for metabolic problems, it does come with risks, including [12]:

Prebiotic fermentation by the gut bacteria may increase gut hormones that promote appetite and glucose responses (such as GLP-1 and peptide YY), as seen in a clinical trial on 10 healthy people and a study in rats [13, 14].

Weight gain is associated with “leaky gut” (intestinal permeability). This may increase circulating pro-inflammatory lipopolysaccharides in the bloodstream (endotoxemia) [15].

In mice with metabolic syndrome, treatment with a probiotic led to a significant reduction in tissue inflammation and “leaky gut” due to a high-fat diet (metabolic endotoxemia) [17].

Bacteroidetes vs Firmicutes – The Obese vs Lean Link?

A larger study in humans found that obesity was indeed associated with [2]:

Interestingly, mice that have 2 copies of the leptin gene also have a 50% reduction in Bacteroidetes, suggesting that obesity may also change the gut bacteria composition [23].

Note: Lactobacilli, Streptococci, and Staphylococci are Firmicutes, whereas Bifidobacteria are actinobacteria, which are neither Firmicutes nor Bacteroidetes.

Although a high number of Firmicutes (like Lactobacilli) in the gut seems to correlate with obesity, supplementation with Lactobacilli helped with weight loss in many cases.

Consuming probiotics can reduce body weight and BMI. A greater effect may be achieved in overweight subjects, when multiple species of probiotics are consumed in combination or when they are taken for more than 8 weeks [24].

Consult your doctor before taking probiotic bacteria. Never consume probiotics or implement any other lifestyle and dietary changes in place of what your doctor recommends or prescribes

Oral administration of B. longum, B. bifidum, B. infantis, and B. animalis decreased glucose levels, ameliorated insulin resistance, and reduced the expressions of inflammatory adipocytokines in obese mice [26].

In two clinical trials on almost 150 obese children, the intake of synbiotics (probiotics + prebiotics) resulted in a significant reduction in BMI, waist circumference, and some cardiometabolic risk factors, such as total cholesterol, LDL-cholesterol, and triglycerides [27, 28].

Several studies have demonstrated that individual probiotic bacteria strains can help with weight loss. However, many of these are observational in nature, while others were done in animals.

Humans with more B. animalis have lower BMI, while those with less of this bacteria have higher BMI [29, 30].

B. breve lowered fat mass and improved GGT and hs-CRP in 52 adults with obese tendencies [32].

B. breve reduced weight and belly fat in a dose-dependent manner. It also reduced total cholesterol, fasting glucose, and insulin in a mice model of diet-induced obesity [33].

However, their constant consumption may be required to maintain this effect [35].

L paracasei decreased energy/food intake in a small trial on 21 people and a study in piglets [40].

A low-calorie diet supplemented with L. plantarum reduced BMI in a small trial on 25 adults with obesity and high blood pressure [44].

In a clinical trial on 125 obese adults, this probiotic strain [45]:

Because this probiotic has only been tested in humans, there is no evidence that its weight-loss and antidiabetic effects will be the same in humans.

The following probiotics have been associated with weight gain in human and animal studies. You may want to avoid these if you are trying to lose weight [49]: