Our goal is to not have a single piece of inaccurate information on this website. If you feel that any of our content is inaccurate, out-of-date, or otherwise questionable, please leave a comment or contact us at suppo[email protected] 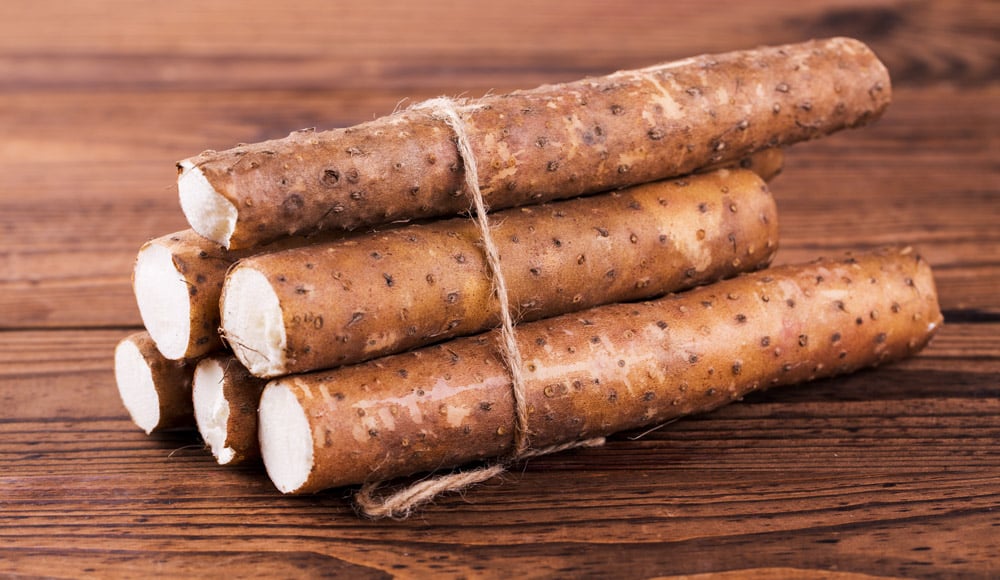 A staple of traditional Chinese medicine, this long tuber is used to increase female fertility and manage diabetes. Does the science support these uses? Read on to learn more about the potential benefits of Chinese yam.

What Is Chinese Yam?

Chinese yam is a climbing vine native to China that is currently widespread throughout East Asia. Although this herb has medical advantages, it also carries major drawbacks for the environment; it can quickly invade habitats and may reduce plant diversity. It was brought to the United States in the 1800s and has spread across the country since [1].

Chinese yam root (which may also be called a tuber or rhizome) was traditionally combined with other herbs to manage diabetes, improve women’s reproductive health, and support digestive health [2, 3, 4].

People in China eat the roots as a mild tonic food, along with other yams. Japanese people call it “nagaimo,” which translates to “long yam” [5, 6].

Traditional Chinese medicine (TCM) practitioners claim that Chinese yam can restore the vital energy, called qi. According to them, Chinese yam increases yin, which is often linked to feminine qualities. It is considered to stimulate the spleen, lungs, and kidneys.

The official scientific name of Chinese yam is Dioscorea polystachya. However, some sources report it as D. opposita or even D. villosa, the latter of which is a different species called wild yam. Unlike Chinese yam, wild yam and Mexican yam are commonly used to make bioidentical hormones (estrogen and progesterone) used in menopausal therapy [7, 1, 8, 9].

When they are picked fresh, Chinese yams are between 13.5% and 34% starch; the broad range may be due to differences in water content. Part of the starch gets broken down during the cooking process, so raw yams are higher in resistant starch than boiled yams [10, 11, 12, 13].

Chinese yams are a source of vitamins B1 and C. They also contain significant amounts of potassium, phosphorus, calcium, magnesium, iron, zinc, copper, and manganese [15, 11].

Chinese yam is very easy to cook. You can chop up the roots and stir-fry or saute with your spices of choice in just a couple of minutes. Plus, you can substitute it in many recipes that use other types of yams and sweet potatoes. Unlike other yams, Chinese yam is not very sweet.

Diosgenin is a phytoestrogen: a plant steroid that acts like an estrogen. Most members of the yam family produce diosgenin, including the Chinese yam [16].

DOI is an estrogen-stimulating protein recently discovered in Chinese yam. It is being researched as a safer, natural alternative to hormone replacement therapy in menopausal women. In rats, DOI increased estradiol and progesterone levels, prevented bone loss, and enhanced cognition [5].

Although the active compounds in Chinese yam may increase progesterone levels under some circumstances, the herb does not actually contain progesterone. Diosgenin is used to make progesterone in the lab since it is chemically similar to sex hormones. However, the body cannot convert it into progesterone [22].

Chinese yam contains other active compounds like allantoin, an antioxidant that promotes wound healing, and several antioxidant flavonoids and phenolics [12, 26].

Raw Chinese yam is also high in resistant starch, which increases butyrate in the gut and supports your digestive health [13].

At least one clinical trial has found that Chinese yam could benefit cognition, but this was a very small study which has not been repeated. While Chinese yam is safe to consume as food, it has not been approved by the FDA for any medical purpose or health claim. Talk to your doctor about better-studied alternatives for your health goals.

In a study of 28 healthy adults, a diosgenin-rich yam extract improved markers of cognitive function and memory, without producing side effects. Diosgenin also repaired brain function in a mouse model of Alzheimer’s disease [27].

No clinical evidence supports the use of Chinese yam for any of the conditions listed in this section. Below is a summary of the existing animal and cell-based research, which should guide further investigational efforts. However, the studies listed below should not be interpreted as supportive of any health benefit.

Out of 600 species in its plant family, Chinese yam is by far the most commonly used in traditional medicine for enhancing women’s reproductive health – from increasing fertility to reducing menstrual and menopausal symptoms. Only a subset of the traditional claims has been tested [5].

After menopause and as ovulation ceases, progesterone and estrogen levels drop. Although both synthetic and bioidentical hormones are therapeutic options that aim to compensate for the drop in sex hormones, neither is ideal [28].

Chinese yam contains multiple compounds that can mimic female sex hormones. These compounds (including diosgenin, DOI, adenosine, and arbutin) are currently under investigation for their potential against [18, 29, 30, 5]:

Chinese yam may increase progesterone and estrogen levels, according to studies in menopausal rats. In lab settings, it also activated the enzyme aromatase, which makes estrogen. In rodents, it increases the response to the pituitary’s FSH, which along with LH orchestrates the activity of female sex hormones in the body [28, 5].

In one remarkable case study, a traditional tonic including Chinese yam, rehmannia, epimedium, and other herbs, may have restored fertility in a woman with ovarian failure. However, this was only a single case which has not been repeated in clinical settings. It should not be used as grounds to take Chinese yam for fertility [24, 3].

According to animal and cell studies, Chinese yam and its extracts may promote the growth of healthy bacteria in the digestive system. Eating Chinese yam increased beneficial Lactobacillus bacteria, blocked the ulcer-causing E. coli, and decreased gut inflammation in mice and rats [31, 32, 33, 34, 35].

In animals, polysaccharides from Chinese yam decreased blood sugar. Meanwhile, diosgenin increased insulin sensitivity (by binding to PPAR gamma). Chinese yam may be a good functional food for diabetes or prediabetes, but these benefits have not been investigated in humans [23, 19].

In mice, diosgenin and mucilage from Chinese yam increased the activity of the immune system and improved the animals’ ability to fight infections that they had encountered before, such as the inactive viruses in vaccines [36, 37, 35].

Mucilage from yam increased several indicators of immune function in animals, including [37]:

As part of its immune-boosting effects in animals, Chinese yam increased inflammatory cytokines (TNF-alpha and IL-6) [36, 37, 35].

Chinese yam may affect Th1– and Th2-dominant people differently. In animals, diosgenin increased the Th1 response, which can help fight infections but becomes excessive in people with autoimmune issues [35].

Mucilage has traditionally been used to soften the skin and manage skin disorders. Mucilage from a variety of plant sources promotes wound healing and soothes rashes and burns. Chinese yam is rich in mucilage; if ground or grated and spread on the skin, it may help heal cuts, scrapes, and other conditions [38, 39, 40, 41].

The research on Chinese yam suffers from considerable confusion about its proper scientific name. The recognized name is Dioscorea polystachya, but a large portion of the literature refers to it as D. opposita or D. oppositifolia. As a result of this confusion, some claims about Chinese yam may actually apply to other species, and vice versa.

One yam, many names: the Chinese yam is widespread through East and Southeast Asia, and so has acquired a host of titles, including: cinnamon vine, nagaimo, huáishān, shānyào, huáishānyào, sanyak, củ mài, khoai mài, and more [42, 43, 44, 45, 46].

In traditional Chinese medicine, Chinese yam is often combined with other herbs including astragalus, schisandra, rehmannia, and others [2, 47].

Combined supplements are readily available to purchase at health food stores or online. These combinations usually include rehmannia or schisandra; they may also include stranger ingredients, like cordyceps mycelium or polyrhachis ant extract. Yes, like that kind of ant. Really.

Chinese yam is an invasive species in the United States. Multiple states, including Michigan, have active control programs whereby the government asks citizens to report sightings of Chinese yam. Furthermore, the only way to make sure the plant won’t come back is to remove the whole thing, including the nutritious root [7, 48, 42].

You can identify this plant by its heart–shaped leaves and “air potatoes.” If you live in the United States (from southern Vermont to Georgia and as far west as Oklahoma), you may be able to gather it wild while helping out your local ecosystem [7, 48, 42].

Call your local conservation officer to find out if Chinese yam is a problem in your area. There might be additional resources available for intrepid foragers who want to go dig up this nutritious tuber!

Can You Grow Your Own?

Because it is an invasive species, North American governments carefully control the spread of Chinese yam. In Canada, it is regulated as a pest. To protect the local ecosystem, avoid planting Chinese yam in an outdoor garden; gather it wild or buy it from a Chinese grocery [49].

Chinese yam is considered very safe to eat, but it may not be for everyone.

Diosgenin may activate estrogen receptors and increase estrogen production. People who wish to reduce estrogenic effects in their bodies may want to avoid Chinese yam [16, 5].

Finally, most commercial Chinese yam is grown and processed in China. Chinese agriculture is at high risk of heavy metal pollution with chromium, nickel, arsenic, cadmium, and lead. Local foraging of invasive Chinese yam may be safer than buying imported yam [50].

There is no safe and effective dose of Chinese yam for any medical purpose or health claim because no sufficiently powered study has been conducted to find one.

50 mg per day of a commercial diosgenin-rich yam extract, the equivalent of 8 mg of pure diosgenin, appears to improve cognitive function in healthy adults [27].

In one case study, 2.5 g of Chinese yam extract, in combination with other herbs, successfully improved fertility in a young woman [3].

Note: it’s important not to confuse Chinese yam with wild yam. Carefully read the label before you purchase Chinese yam supplements. Unlike Chinese yam, wild yam is often sold in the form of creams.

Chinese yam is a climbing vine native to East Asia and invasive in the United States. Its root is a nutritious tuber rich in starch, vitamins, minerals, and beneficial active compounds.

In traditional Chinese medicine, it’s almost always combined with several other herbs, including schisandra and rehmannia.

People who want to avoid estrogenic effects may want to avoid Chinese yam. But if you’re looking for a natural alternative to hormone therapy during menopause, you might want to give Chinese yam a try.