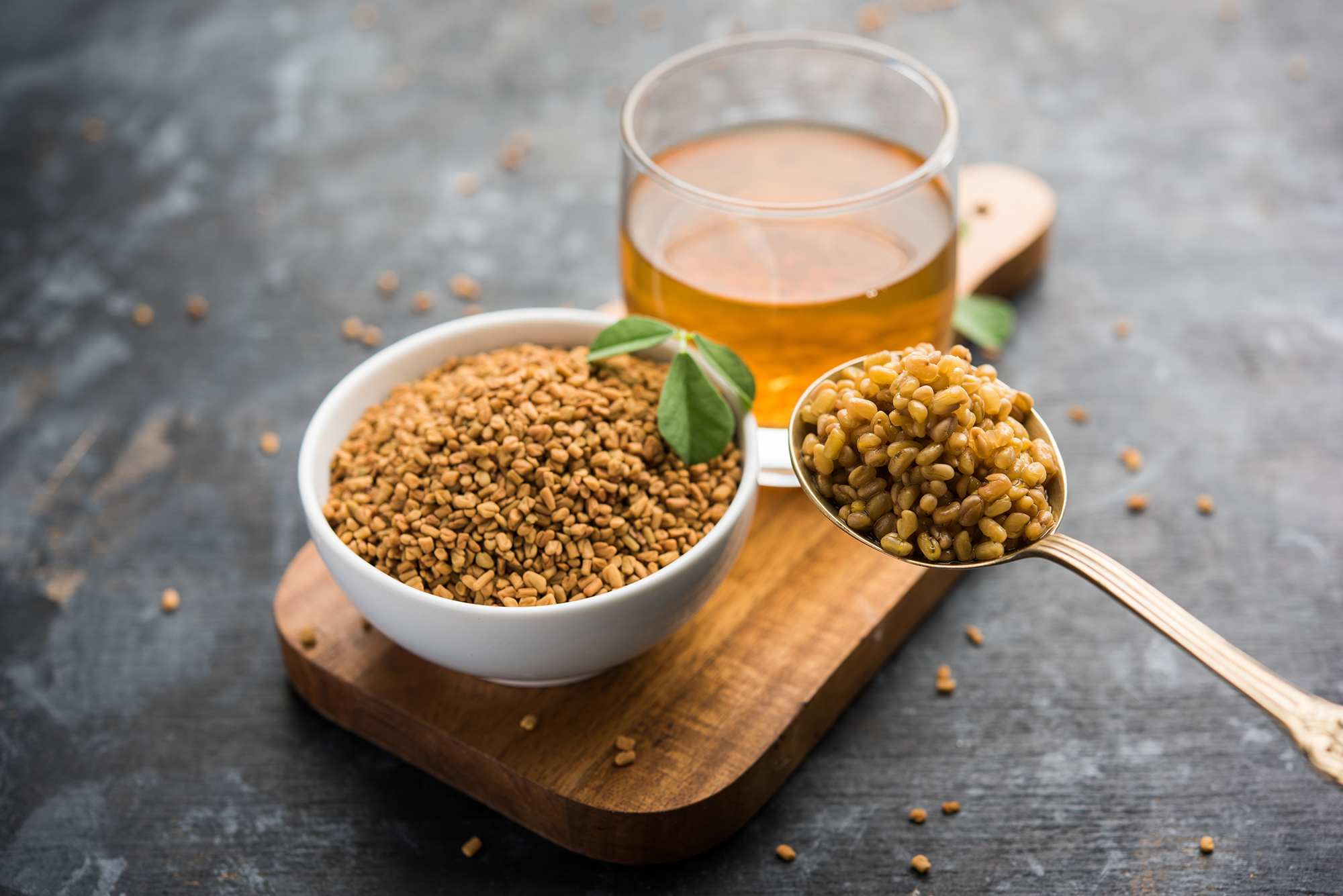 For millennia, people have used fenugreek as an important part of diet and medicine, but it has only recently been introduced to the West. Plants like fenugreek are not only nutritious: many studies suggest that they may provide numerous health benefits. Read more to learn about fenugreek’s effect on your health.

Fenugreek is a leafy green legume native to Eurasia and Africa that is widely used for its nutritional and aromatic value [1].

For almost six thousand years, traditional healers in Africa and Asia have claimed that it eases labor, alleviates digestive problems, and improves skin conditions such as boils, eczema, and inflammation [1, 2, 3].

Fenugreek goes by many names around the world. It is methi in Hindi, hulba in Arabic, moshoseitaro in Greek, uluva in Malayalam, shoot in Hebrew, and dari in Persian. Fenugreek is a common ingredient in spice powders in Indian cuisine. It is used fresh in salads and cooked or dried in other dishes [1].

Today, it is most often taken by athletes, diabetics, and people who struggle to maintain normal levels of fat in their blood [4].

Fenugreek is also rich in dietary fiber, which accounts for between 45 and 50% of the seeds by weight. Diets high in fiber support good overall health, aid digestion, and reduce blood fat and sugar [5].

Each tablespoon of fenugreek seed contains approximately 7 g of fiber, 3.6 g of protein, and 1.1 g of fats. It also contains many nutrients, including [1]:

It may not sound like much, but those are significant amounts in terms of daily recommended intakes.

Consider, for example, that the National Institutes of Health recommends that adults should get between 8 mg (for a man) and 18 mg (for a woman) of iron in their diets per day. A single tablespoon of fenugreek seeds contains 20 – 45% of the daily recommended intake of iron [6, 7].

Fenugreek seeds also contain other nutrients (like carotenes, folate, and magnesium), but not enough to make a dent in recommended intakes [6, 1].

According to some researchers, a number of the health benefits of fenugreek could be due to its saponins. Many plants produce different saponins; plants use these soap-like compounds as weapons against disease and plant-eating animals. However, some herbivorous animals may learn that some saponins are healthy (or, at least, not dangerous) and will deliberately consume the plants that make them [8].

Some research suggests that certain saponins may help protect against cancer. People who eat a lot of safe dietary saponins tend to have lower cholesterol, sugar, and fat in the blood and a lower incidence of blood clotting and kidney stones. And what’s more, fenugreek contains steroid-like saponins that some researchers believe might form the basis for a testosterone boost [9, 10, 11].

Trigonelline, another compound of fenugreek, is an alkaloid with a structure very similar to vitamin B3. According to some studies, trigonelline could potentially have antibacterial, antiviral, fat-lowering, sugar-lowering, anti-tumor, and brain-protective effects [12].

Fenugreek is abundant in compounds with antioxidant activity. These include apigenin, luteolin, caffeic acid, and coumaric acid [13].

Some commercially available “testosterone boosters” with fenugreek claim to increase testosterone by blocking aromatase, 5-alpha-reductase, or sex hormone binding globulin (SHBG). But what does this mean?

Note that only one study has identified this mechanism, and it has not been investigated in cell studies. Much more research will be required to confirm any effect of fenugreek on testosterone.

Meanwhile, sex hormone binding globulin, or SHBG, binds to testosterone in the blood and decreases free testosterone. Only one study has investigated the effect of fenugreek on SHBG so far. This study found no significant change in SHBG after two months of supplementation [15].

According to limited early studies, men taking fenugreek extracts may have lower aromatase and 5-alpha reductase activity, which has the potential to increase testosterone.

To understand fenugreek’s anticancer potential, we’re going to zoom into its effects on cancer on a cellular level.

Another similar saponin, protodioscin, was similarly associated with cell death in human leukemia cells [18, 19]. But remember, these were cell studies and not clinical trials.

There is one reported case of a man developing pulmonary embolism, or a blood clot in the lung, after taking a testosterone-boosting supplement containing fenugreek. The mechanism of this event was unclear [20].

According to some researchers, people who are allergic to chickpeas may also have adverse reactions to fenugreek because the two plants contain similar proteins and allergens. Some patients reported wheezing and spasms in the airway after consuming fenugreek [4].

Fenugreek seed extract has been associated with hyperthyroidism in rats. If you have thyroid problems, consult your doctor before using fenugreek [21].

Traditionally, fenugreek was used to induce labor. Because of its potential to affect uterine contractions, fenugreek should not be eaten or taken during pregnancy. While fenugreek is a relatively common foodstuff, little formal research exists on its effects during breastfeeding [22, 4].

Fenugreek contains compounds that act like estrogen in the body. People with hormone-sensitive cancers should avoid it [22].

The list of potential interactions below should not be considered exhaustive; other substances may interact with fenugreek. Better safe than sorry! Always talk to your doctor before starting a new supplement to avoid dangerous and unexpected interactions.

Because of its blood-thinning properties, fenugreek seed may increase the potency of warfarin, a commonly prescribed anticoagulant. While the observed association has been minor, it may increase the risk of blood loss, even from small cuts [23, 4].

According to some researchers, the sticky fiber in fenugreek seed that helps it moisturize dry skin could potentially also coat the lining of the digestive tract and blocks the absorption of drugs taken orally. Therefore, it’s important to talk to your doctor before taking fenugreek alongside prescription drugs [4].

Since fenugreek may lower blood sugar, it should not be combined with glucose-lowering medication like insulin. This combination has the potential to promote hypoglycemia (abnormally low blood sugar), which can cause unsteadiness, dizziness, and nausea, especially in older people. If you have a history of hypoglycemia, talk to your doctor before taking fenugreek supplements [4, 24, 25].

Men who are prone to low testosterone and people prone to insulin resistance could be the most likely to benefit from dietary or supplemented fenugreek.

Researchers have identified a few genes that control a person’s production of testosterone and SHBG. These include [26, 27, 28]:

Researchers have identified a few genes that control a person’s insulin sensitivity. These include [31]:

As a dietary supplement, fenugreek is available in capsules or as loose defatted seed powder. Ground up seeds can also be mixed into foods and liquids; this powder is used as a spice in vindaloo paste.

Search for fenugreek seed or “methi” recipes for some creative ways to get this superfood into your diet.

Fenugreek is considered a relatively easy plant to grow in a pot or the ground; both the seeds and the greens are good to eat. Both fenugreek leaves and seeds can also be soaked in hot water to make tea. One tablespoon of the seeds is typically enough to make a cup of tea.

Some athletes take fenugreek seed and creatine supplements in an attempt to improve athletic performance. In a study of 47 resistance-trained men, those who supplemented with 5 g creatine and 900 mg fenugreek had increased upper body strength and improved body composition. This study does not clarify how much of the result could be due to the fenugreek [35].

A combination of fenugreek seed and Lespedeza cuneata extracts was given to 44 otherwise healthy men with low testosterone. After 8 weeks of taking 400 mg of combined supplement per day, about a third of the participants gave significantly improved responses on a survey designed to identify severe androgen deficiency. Much more research will be needed to reproduce and interpret these results [36, 37].

Fenugreek is often sold in combination with other supplements, such as blessed thistle or fennel, with claims of increasing milk production in breastfeeding mothers. The effectiveness of these combinations has not been studied.

According to one study, a single cup of tea made from boiled fenugreek seeds may be enough to reduce your appetite.

Studies on the clinical use of defatted fenugreek seed powder typically use large quantities of up to 100 g per day, though some have found a benefit with as little as 5 g per day [4].

If you are looking to get a larger amount of fenugreek without breaking the bank, try cooking with or grinding up the whole seeds. This could be a great opportunity to expand your household cookbook!

Fenugreek is a leafy plant native to parts of Eurasia and Africa. It has been a part of traditional medicine for millennia, and many cultures cook with it to this day. According to some researchers, its saponins are most likely responsible for its reported benefits.

Avoid fenugreek if you are allergic to chickpeas, if you have thyroid problems, or if you are pregnant. People who are genetically prone to low testosterone or insulin resistance are among the most likely to benefit from fenugreek supplements. Always consult your doctor before starting a new supplement such as fenugreek.

Fenugreek is available in capsules, as a seed powder, as whole seeds, or as a whole plant. The seeds and leaves are both healthy and safe to consume for most people.